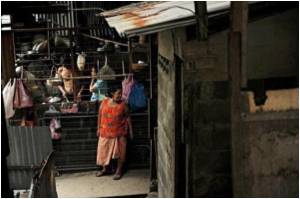 A scientist has said that people in ancient Rome 2,000 years ago had better access to clean water and sanitation that keeps disease-causing human excrement out of contact with people. This is in comparison with many residents of the 21st century.

Women in developing countries could play a major role in remedying the situation, if given the chance, she added. Jeanette A. Brown, Ph.D., spoke on the global crisis in availability of clean water and basic sanitation like toilets and sewage disposal at the 244th National Meeting & Exposition of the American Chemical Society (ACS), the world's largest scientific society. It was part of a symposium, "International Sustainable Development: Institutional Frameworks." Abstracts of other presentations appear below.

Is the World "off Track or on Track" in Meeting Sanitation Targets?

UN's Millennium Development Goals are badly off track in meeting the sanitation demands of more than two billion people.
Advertisement

The ACS meeting continues here through Thursday in the Pennsylvania Convention Center and downtown hotels. It features 8,600 presentations on new advances in science and other topics, and ACS expects an anticipated attendance of 14,000 scientists and others.


"It's a sad fact that much of the world's population in 2012 has less than people living in ancient Rome," said Brown. "About 2.6 billion people - almost 1 in 3 people in the world ― lack access to even a simple 'improved' latrine, or pit toilet. More people have access to a cell phone today than to a toilet."

Access to sanitation facilities reduces the likelihood of parasitic worm infections, shows study.
Advertisement
Brown said the lack of sanitation and clean water, especially in developing countries of sub-Sahara Africa and south Asia, claims an enormous toll in preventable illness, death and human suffering every year. She is with the University of Connecticut in Storrs, and is immediate past president of the Water Environment Federation, an international organization of water quality professionals headquartered in Alexandria, Va. Estimates indicate, for instance, that it sickens hundreds of millions of people every year, causing 1.6 million deaths from cholera and other diarrheal diseases transmitted by fecal contamination of drinking water.

The problem goes beyond the impoverished conditions that prevail in developing countries, Brown said. She explained that "archaic" cultural practices and attitudes toward women sometimes hinder progress in developing safe drinking water and basic sanitation in villages and towns in these developing nations.

For instance, Brown explained that men have higher status in these villages, and defecate and urinate openly whenever and wherever they choose. Women and girls, however, may be forbidden to defecate until after dark, and have to walk long distances from the village to do so. Even when villages have primitive toilets, women fear using them because of the risk of being raped. Women and girls likewise bear the burden of obtaining clean water from wells, often having to walk several miles roundtrip each morning carrying jugs that can weigh up to 80 pounds.

Water-bearing, Brown said, is a major reason why girls drop out of school, being unable to attend classes because of time or fatigue. Schools without toilet facilities also limit education of girls when menstruation begins.

Ironically, however, women often are not permitted to participate in developing and sustaining water and sanitation projects that could ease those burdens.

"Women are more likely to commit to projects since they see the value for their children and the community at large," said Brown. "A study by the International Water and Sanitation Centre (IRC) of community water and sanitation projects in 88 communities found that projects designed and run with the full participation of women are more sustainable and effective than those that do not."

However, she said that women often do not have the opportunity to work on such projects because they lack education, or local cultural rules prevent education for women and even prohibit their using local toilet facilities.

Despite the barriers, she said that there are a number of organizations working to bring better sanitation and clean drinking water to developing nations. Among these are Water for People, Wine to Water, Engineers without Borders and the Bill & Melinda Gates Foundation, as well as the United Nations. The groups have developed some ways of bringing revenue to the villages, like teaching residents to construct composting toilets so that the material can then be sold and also used in their farm fields as fertilizers. In addition, engineers work on these clean water and sanitation projects and teach people how to lay pipe, how to put in wells and how to maintain the pumps so they work continually.

Water Matters: Why You Need to Drink Enough Water Everyday
News Archive
News Resource
Advertisement
News Category
How to Reduce Needle Anxiety in Children? Tobacco Addiction: Here's How to Break the Habit Parents are 'Winging It' on Their Kids' Mobile Use Ankle and Ankle Movements While Riding an Hoverboard Is It Healthy to Let Your Mind Wander?
More News
Sign up for Wellness Consult a Doctor Sign up for Selfcare