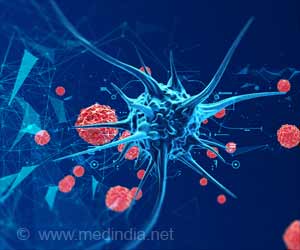 The research conducted by scientists from the German Cancer Research Center (DKFZ) and the University of Innsbruck, together with a Europe-wide research network is published in the journal Cell.

For the treatment of acute myeloid leukemia (AML), a combination of mTOR inhibitors along with drugs that block the activity of the MNK gene, CDK9, or c-Myc can help overcome resistance to mTOR inhibitors.
Advertisement
‘In cancer, developmental brain disorders, and epilepsy anchor proteins called G3BP play an important role in suppressing the MTOR activity. In breast cancer, low levels of G3BP indicate a poor prognosis.’
Read More..

The signaling protein known as MTOR (Mechanistic Target of Rapamycin) is a sensor for nutrients like amino acids and sugars. When sufficient amount of nutrients are available, MTOR boosts metabolism. It also makes sure that sufficient energy and cellular building blocks are available. Hence, MTOR is a central switch for metabolism and any errors in its activation can lead to serious diseases such as cancers. It can also lead to developmental disorders of the nervous system resulting in behavioral disorders. If MTOR is malfunctioning, it can also result in epilepsy.


The cell controls MTOR activity with the help of suppressors, which are molecules that inhibit a protein and help to regulate its activity. The TSC (tuberous sclerosis) complex is a suppressor for MTOR, which is located together with MTOR in the cell called lysosomes and helps to keep MTOR in check. For example, if there is a change in one of the TSC complex components and they no longer remain in the lysosome, this can lead to excessive MTOR activity with severe health consequences.

Fits or convulsions or Epilepsy is characterized by recurrent, involuntary seizures and is described as a chronic neurological disorder
Advertisement
Anchor Protein

In breast cancer cells, this anchor function plays an important role. If the amount of the anchor G3BP proteins reduces in the cell culture, then an increase in the MTOR activity and cell migration is seen.

The scientists were able to show in cell cultures that drugs that inhibit this MTOR, can prevent the spread of cancer. Especially in breast cancer, low levels of G3BP indicate a poor prognosis.

Kathrin Thedieck, professor of biochemistry at the University of Innsbruck said, "Markers like the G3BP proteins could be helpful to personalize therapies based on inhibition of MTOR."

Drugs that block MTOR are already approved as anti-cancer drugs. These drugs could be tested specifically in furture studies.

In the brain, G3BP proteins were able to inhibit MTOR. The scientists observed disturbances in brain development when G3BP is absent in zebrafish which is an important animal model. These disturbances resulted in neuronal hyperactivity similar to epilepsy in humans. Drugs that inhibit MTOR can suppress this neuronal discharges.

Christiane Opitz of DKFZ said, " We therefore hope that patients with rare hereditary neurological diseases in which dysfunctions of the G3BP proteins play a role could benefit from drugs against MTOR."

The scientists plan to investigate this further with their Europe-wide research network.

Scientists aim to provide healthy couples who have a child affected by a developmental disorder with a personalised pre-conception risk evaluation.