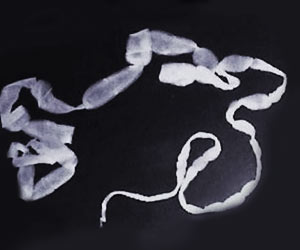 The World Health Organization estimates that tapeworm infection is one of the leading causes of epilepsy in the developing world and results in 29 percent of epilepsy cases in endemic areas. It is thought to affect about 7 million people in China alone.

A first of its kind study examined tapeworm infection rates within schools in China and suggested solutions for school children. Tapeworm infection caused due to eating contaminated pork can affect the brain, leading to learning impairments and possible poverty, finds study.

The study, published in PLoS Neglected Tropical Diseases, focuses on Taenia solium, a tapeworm that infects millions of impoverished people worldwide and can cause a disorder of the central nervous system called neurocysticercosis.


A Stanford-led study in China has revealed for the first time high levels of a potentially fatal tapeworm infection among school-age children. The researchers suggest solutions that could reduce infections in this sensitive age range and possibly improve education outcomes and reduce poverty.
Advertisement
"This disease invades the brain," said John Openshaw, the study's lead author and an infectious disease instructor at Stanford School of Medicine. "Children who are affected during formative school years risk cognitive deficits which could enforce a cycle of poverty."

"While historically researchers have studied adults with this disease, the burden on kids and what that burden means for affected countries in terms of lost productivity and lost income is unknown," Openshaw said. "We hope our work will fuel interest in figuring that out."

Found commonly in the muscle of pigs allowed to roam and consume human feces in regions without indoor toilets, the tapeworm can infest the intestines of people who consume under-cooked pork. Thousands of tapeworm eggs are then shed in the infected person's feces, contaminating the environment, including drinking water sources and food crops fertilized with human feces.

The disease can take a tragic turn when people directly consume the tapeworm eggs, either through contact with a person who has the eggs on their hands and clothing or by eating food contaminated with the eggs. In those cases, the tapeworm migrates out of the human digestive tract and can invade the brain. Symptoms of this infection can range from chronic headaches to seizures to psychiatric disturbances such as hallucinations.

To explore whether children are particularly at risk of tapeworm infection, the researchers tested fifth and sixth grade students, mostly 11- to 13-year-olds, in a remote Himalayan region of western Sichuan province. The majority of the children boarded at their schools during the week. The researchers found antibodies for neurocysticercosis in as many as 22 percent of the children they tested in some schools - a rate that's higher than what the group saw in adults in surrounding villages.

Openshaw said that the brain form of this disease spreads human to human, with no pigs required. "All you need is a couple people with gastrointestinal tapeworms and poor hygiene," he said, conditions that exist in rural schools studied.

Many of the children only have one or two pairs of clothes at school, so they wear and sleep - sometimes in shared beds - the same set of clothes for days at a time. Attempts to have the children wash their clothes are infrequent and of mixed success, according to Openshaw. School bathrooms are generally unhygienic pit latrines, soap is rarely available, and taps for handwashing don't work in many cases.

"Schools appear to be hotbeds of transmission, as well as places for potentially effective intervention," Openshaw said.

Community education will be key to pushing down infections - a third of parents who responded to a survey believed intestinal worms have no adverse effects, and 19 percent thought less activity and drinking hot water or eating spicy food would help.

The researchers also plan to distribute medication in schools to counter the tapeworms, and administer vaccines and anti-parasitic medications to pigs in the region. One such drug is particularly promising, according to co-author Stephen Felt, an associate professor of comparative medicine. The drug, oxfendazole, not only kills muscle-encysted larvae in pigs, but protects them from reinfection for up to three months. Felt cautioned that oxfendazole may lead to unsightly scarring of the meat, which might turn off consumers. A vaccine called Cysvax also appears to be highly effective, but it requires booster doses - a significant drawback. Combining Cysvax and oxfendazole might be the most effective approach, according to Felt.

In schools, Openshaw and his colleagues are working to install working hand-washing stations near bathrooms, develop cost effective ways of supplying soap, provide curriculum materials about the disease and hand washing, and integrate good hand hygiene into school-based reward systems. The researchers have forthcoming work that measures cognitive deficiencies in the children, and better defines social links - likely transmission pathways - among them.

"The tools to eradicate this disease are available," Openshaw said. "We hope that as the true burden of this disease on children becomes clearer, governments and nongovernmental actors will commit more resources."

Another Treatment Target for Brain Tapeworm Infection Found
New treatment target for neurocysticerosis - brain tapeworm infection, which a major cause of ......

New Drugs for Fox Tapeworm Infection
Scientists are testing a series of novel drugs that could inhibit fox tapeworm infections in ......

Treatment of Humans and Pigs May Reduce Transmission of Endemic Tapeworm Infection
The transmission of Taenia solium can be stopped on a population-wide level with mass treatments of ...