Keeping Bacteria Away from Dental Braces 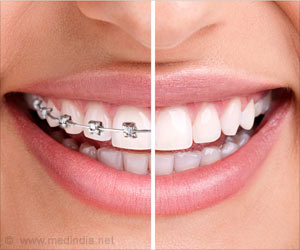 While clear, plastic aligners have grown in popularity as alternatives to bulky, metal braces, these appliances can become easily contaminated. A new study now reports in ACS Applied Materials & Interfaces development of a film to prevent bacteria from growing on them.

Advertisement
‘Plastic alligners with layered films of carboxymethylcellulose and chitosan prevented bacteria from adhering to it.’

According to the American Association of Orthodontists, more than 5 million people seek orthodontic treatments each year. These procedures include braces and aligners, a set of plastic pieces that shift the teeth slightly over time, in an attempt to fix crowded jaws, over- and under-bites and improperly aligned teeth. Clear aligners or retainers, known collectively as clear overlay appliances (COAs) are made by taking a dental cast and using pressure or heat on a plastic sheet. But bacteria frequently build up on COAs as difficult-to-treat biofilms, and the plastics easily wear down. Scientists have turned to developing simple and affordable coatings to combat this. Drawing inspiration from super-hydrophilic antibacterial coatings on other medical devices, Hyo-Won Ahn, Jinkee Hong and colleagues wanted to see if they could make something similar for COAs in the unique oral environment.


The researchers took a polymer sheet made of polyethylene terephthalate that was modified with glycol (PETG) and layered films of carboxymethylcellulose and chitosan on it. This layered film created a super-hydrophilic surface, or a surface that loves water, that prevented bacteria from adhering. When PETG with the film was compared to the bare material, bacterial growth was reduced by 75 percent. The coated plastic also was stronger and more durable, even when tested with artificial saliva and various acidic solutions.

Dental Experts Put Patient's Care Above All
The 'never events' lists out possible failures that should never happen in any circumstance, which ....

Dental Caries in Children can be Prevented With Fluoride Varnish
Dental caries in small children can be avoided with fluoride varnish application, according to a ......

Why are Dental Caries Hard to Treat?
The dental caries developed by both bacteria and fungi tend to work together to resist antifungals. ...