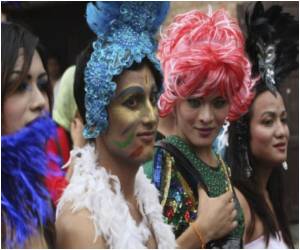 Led by South Asia's only openly homosexual lawmaker and joined by hundreds of gays, lesbians and transsexuals who braved monsoon rains, the Nepalese capital held its first gay pride parade on Wednesday, .

The march was organised by Nepalese parliamentarian Sunil Pant, a vocal gay rights campaigner who rode through the city on an elephant followed by around 500 supporters, many of whom danced and played musical instruments.

Nepal's only out-of-the-closet gay Member of Parliament declared that the country will hold the first gay pride parade.
Advertisement

"We want to raise our voices and ensure that third-gender people get the same opportunities as everyone else," said 21-year-old transsexual Karuna Adhikari, who marched in a flowing white dress.


"I've been coming for a few years, but this year's event is much bigger than others."

Pant said the event, attended by foreign ambassadors and tourists, was the first international gay pride march to be held in Kathmandu, although smaller parades have been held on the same date in previous years.

At the Rainbow Parade in Chennai, hundreds of members of the Lesbian Gay Bisexual Transgender (LGBT) community turned out of their shells to hail their existence in the society.
Advertisement
It was timed to coincide with the Hindu festival of Gai Jatra, traditionally a colourful event, with young men dressing up and processing through town centres.

Nepal is one of the more progressive countries in South Asia with regard to gays and lesbians.

Two years ago, the Supreme Court ordered the government to enact laws to guarantee their rights after a pressure group run by Pant filed a petition.

A bill to legalise gay marriage is going through parliament.

Thousands of people took part in a gay pride parade, celebrating Mexico City's historic decision six months ago to become the first city in Latin America to allow same-sex marriage.
Advertisement
Advertisement
This site uses cookies to deliver our services.By using our site, you acknowledge that you have read and understand our Cookie Policy, Privacy Policy, and our Terms of Use  Ok, Got it. Close
×