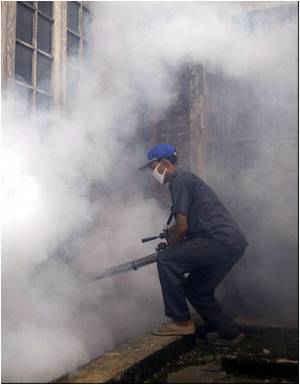 A special drive to check dengue fever cases has been launched by the Karnataka government, say sources.

"I have directed the officials and doctors to contain the dreadful fever, as the number of cases has gone up to 2,430 this year, with 21 deaths reported. Bangalore has accounted for 28 percent of the cases so far," Limbavali told reporters here after a meeting of officials.

The health department will enlist the support of private doctors to diagnose dengue cases and set up blood test centres to conduct Mac Elisa exams for diagnosis in identified high-risk areas.


Caused by the dengue virus, the infectious tropical disease leads to fever, headache, muscle and joint pains and skin rash.

Though the state is fourth across the country in the number of dengue cases, it ranks second in toll, including four in Bangalore.

"District health officers will depute personnel to high-risk localities for educating the people about the Aedes Larvae that causes dengue fever. Fogging and spraying operations will be take up at all sensitive and hyper-sensitive places," Limbavali added.