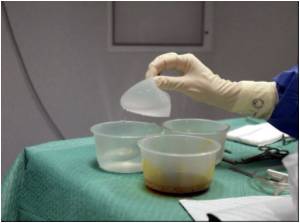 Doctors have blamed the Jordan effect behind the surge in boob jobs over the years.

The number of fake breasts exploding or leaking has nearly trebled in four years, figures show. There has been a ten per cent rise in the last year alone.

Breast augmentation or augmentation mammoplasty uses breast implants to increase breast size, alter shape or texture. It may be done for a variety of reasons.
Advertisement

This is being called the Jordan Syndrome, after Katie Price - real name Jordan - who has had at least three operations as she rose to a 32FF - before having more manageable 32D implants fitted.


"There is the Jordan Syndrome, where some women want bigger and bigger breasts. The bigger they are, the more problems are likely to occur," the Sun quoted top plastic surgeon Douglas McGeorge as saying.

Surgical procedure for lifting sagging or drooping breasts is called Breast lifting or Mastopexy.
Advertisement
He also blamed cheap implants and overseas clinics that may or may not be following health standards.

"Some people have no idea who is treating them or the standards of the hospital equipment," McGeorge said.

"Some implants are prone to failure. The cheap option is not always the best," he added.

Patients have complained of wrinkled boobs, painful swelling and implants that go stiff.

Celebs to suffer include former Atomic Kitten Kerry Katona, who had burst stitches around her G-cup implants in 2005 and actress Tara Reid was left with uneven boobs, scars and bumps.

Breast reduction surgery is usually done for excessively large breasts to improve their cosmetic looks or if they give rise to symptoms such as aches of the shoulder or back.
Advertisement
<< Take Those Near Perfect Celebrity Pictures With a Pinch of ...
'Burnout Syndrome' Could Be a Precursor To Depressive Disor... >>

Drug - Food Interactions Find a Hospital Daily Calorie Requirements Blood Donation - Recipients The Essence of Yoga Hearing Loss Calculator How to Reduce School Bag Weight - Simple Tips Diaphragmatic Hernia Indian Medical Journals Iron Intake Calculator
This site uses cookies to deliver our services.By using our site, you acknowledge that you have read and understand our Cookie Policy, Privacy Policy, and our Terms of Use  Ok, Got it. Close
×