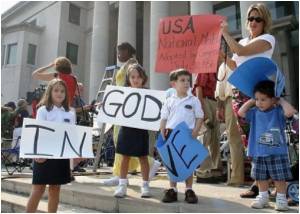 About 40 percent Americans who are active participants in religious groups, are likelier to feel good about their communities than their non-religious peers, suggests Pew Research Center poll, Friday.

Paediatric oncologists are likely to accept religion as a resort when medicine has failed the patient, according to a new study.
Advertisement

The pollsters also found that 53 percent of religiously active Americans considered other people to be "generally trustworthy," and 45 percent viewed their communities as excellent places to live.


The proportions were 43 percent and 34 percent respectively among those not active in religious groups.

Jim Jansen of the Pew Internet Project said the findings dispelled a belief among some analysts that religiously active Americans might not be fully engaged with the secular world.

His Holiness Pope Benedict XVI was applauded by Hindus for his concern for families struggling with economic troubles.
Advertisement
"We see the opposite," said Jansen in a summary of the telephone survey of 2,303 adults that had a margin of error of 2.3 to 2.6 percentage points. "Those who are active in religious groups seem to be joiners."

Twenty-two percent of the religiously active respondents were also active in political groups, compared with 10 percent for the non-religious. Thirty-four percent took part in charities or volunteer organizations.

The Pew poll also found that religiously active Americans were as likely to use the Internet, cellphones and social networking sites as those who are not, with many regarding the Internet as a help to their involvement in groups.