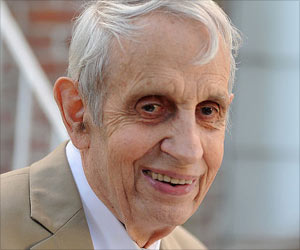 The US mathematician John Forbes Nash, who was the inspiration behind Russell Crowe starrer Oscar-winning film A Beautiful Mind has died in a car crash with his wife.

Crowe, who played him in the 2001 film, took to twitter to pay tribute and wrote, "Stunned... My heart goes out to John and Alicia and family. An amazing partnership. Beautiful minds, beautiful hearts."


According to the police, the 86-year-old Nobel Prize winner and wife Alicia, 82, were thrown from their vehicle when their taxi crashed in New Jersey, the BBC reports. Her taxi driver and a passenger in another car were also injured.

Future Generali is a joint venture between the India based Future Group and the Italy based Generali Group.
Advertisement
Nash, who was born in Bluefield, West Virginia, had first studied in Pittsburgh before moving to Princeton, and had married Alicia Larde in 1957, after having some of his breakthrough works in game theory published. He developed severe schizophrenia shortly after that, and though Alicia made him seek psychiatric care several times, they divorced in 1962.

However, they stayed close and his condition started to improve by the 1980s, after which, they eventually remarried in 2001, and even attended the Oscars in 2002.

Christopher Eisgruber, the President of Princeton, said that he was "stunned and saddened" at the news, and called Nash's "remarkable achievements" an inspiration for generations of mathematicians, economists and scientists.

Nash, who recently received the Abel Prize, another top honor in mathematics, is the man behind the Nobel Prize winning idea, The Nash Equilibrium, which offered a new ability to examine situations of conflict and co-operation, and produce predictions about how people will behave.