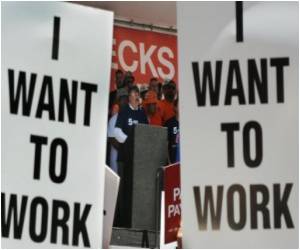 Once upon a time Song A-Hyun was once confident she would follow in her father's footsteps. She wanted to graduate from one of the nation's best universities, land a plum job at a top firm and enjoy a high-flying career.

But the 23-year-old's dreams have faded. Over the past year she has sent out more than 40 resumes ahead of her graduation this month -- only to be rejected every time.

A degree at the top women's university Ewha, a high grade point average of 3.7, a year-long stint in Hong Kong as an exchange student, flawless English skills and two internships were simply not enough.


"Everyone has a pretty good GPA, scores pretty well in English proficiency tests and has done one or two internships, so there may be nothing special in my resume," Song told AFP.

Binge Drinking may Lead to Long-term Unemployment for Women: Study

Unemployment can increase total drinking, alcohol disorders, and/or problem drinking says a study.
Advertisement
"I've worked really hard to get all these qualifications, though...the thing is, there are too many people like me and too few jobs for us."

Song is one of a growing number of highly-educated young South Koreans, who face grim job prospects amid a worsening graduate glut and slowing growth after decades of rapid development.

South Koreans' zeal for education has long been cited as a driver of its stellar rise from acute post-war poverty to global economic powerhouse.

Children and teenagers spend stressful childhoods cramming to get into prestigious universities -- or colleges of some kind, at least. This is seen as vital to prosperity, social standing and even marriage prospects.

The so-called SKY universities -- Seoul National University, Korea University and Yonsei -- are the most prestigious.

But given growing graduate joblessness, the government has launched a campaign to encourage more youngsters to bypass university or college. It is pushing more businesses to hire school-leavers.

About 72 percent of high-school graduates went on to college or university last year, slightly lower than a record 83.8 percent in 2008 but still one of the world's highest figures.

"The excessive 'education inflation' of our country is causing so many problems socially and economically," Lee said earlier this year.

He even proposed setting a hiring quota at government bodies for high-school graduates -- a measure intended to encourage more teenagers to seek work after school ends, instead of heading straight for college with no clear goal.

The official overall unemployment rate is low at around 3 percent, but the rate for those aged 25 to 29 is more than twice as high.

In the second quarter unemployed college or university graduates -- estimated to total 373,000 -- outnumbered jobless high-school graduates for the first time in more than 10 years.

Even at Seoul National University, nearly 30 percent of its Ph.D holders were jobless in 2011 compared to about 15 percent two years earlier.

Big-name firms, apparently responding to official prodding, are hiring or promising to hire more school-leavers and promoting them to higher positions.

Samsung this year hired some 700 high-school graduates for office jobs, in a rare move. SK Group vowed to fill 2,100 jobs -- 30 percent of new openings for this year -- with such applicants.

Other top firms like LG and Hyundai Motor unveiled a plan to hire high-school graduates in far greater numbers than previously.

"Having many people with advanced degrees is a good thing, but in this country, there are too many of them compared to the number of suitable jobs for them," Kim Hi-Sam, a researcher at the Korea Development Institute, told AFP.

"Conglomerates like Samsung, LG, or Hyundai account for only 10 percent of our job market...but ask any college students, they all say they deserve jobs at these top firms and nothing less."

The labour ministry, in a recent report, warned of a shortage of 500,000 jobs for college or university graduates by 2020 and an oversupply of 320,000 jobs available for high-school graduates.

It called for more efforts to prod youngsters to enter the job market early, to cut the number of colleges and to ease discrimination in pay and promotion against high-school graduates.

But for now, college graduates like Song are still desperate.

"If I have children, I'll never press them to go to college like my parents did. I'll tell them to find their real passion first instead of just following the pack," she said.

"But getting married and having children sounds like an impossible luxury right now...until I find a job."

The threat of unemployment among UK medical graduates is being blamed on the failed computerised recruitment system (MTAS)
Advertisement
<< Weighing Molecules 1 at a Time Is Caltech
Perpignan Festival of Photojournalism To Be Dominated By Sy... >>