J&K Lakes, Including Dal, on the Verge of Extinction Thanks to Pollution 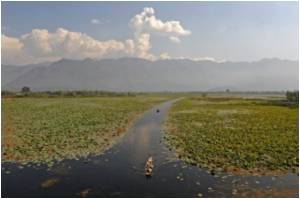 A report of the National Geographic Daily News has revealed that water pollution is rapidly increasing in the northern Indian state of Jammu and Kashmir, including the picturesque Dal, bringing them to the verge of extinction. The situation poses a serious threat to the livelihoods of as many as 1200 households who live in the region.

Jammu and Kashmir, which is already on the recovery path from the grave setback it received due to the extremist bloodbath of over two decades, is again exposed to a direct threat on its economy, which is largely dependant on the tourism sector.

Water contamination due to hazardous industrial waste seeping into the Sutlaj River flowing through Ropar District in Punjab has caused people to get skin diseases and stomach ailments.
Advertisement

More over, it has also kicked the bellies of a number of fishermen, who are dependant on the lake's resources.


Experts have expressed serious concern over this environmental crisis.

"Dal Lake has shrunk to less than half its original size in just 30 years. Poor sanitation systems, shortsighted city planning, and the encroachment of thousands of people are destroying the region's waters", says Majeed Kak, a scientist at the Islamic University of Science and Technology in Srinagar.

A new study has determined that homes are an alarming and probably underestimated source of water pollution, and can contribute to 50 percent more water pollution than previously believed.
Advertisement
Disposal of raw sewage from Srinagar's million-plus inhabitants, which mostly contain polyethylene bags, soda cans, and dead animals, is considered to be the chief reason behind the problem. Poor planning of the road systems has also added to the woes.

"If the government had built the roads around the perimeter of the lake rather than straight through it, then it would have been much harder for people to encroach on the lake," says Azim Tuman, a houseboat owner.

The reluctance of the Indian government's Lakes and Waterways Development Authority, which is responsible for cleaning the lakes, has also disappointed many.

"The money allocated for de-weeding machines to remove the excess weeds from the lake and water-sewage treatment plants has been squandered or is totally ineffective," says Kak.

High chemical content in groundwater has become a serious health hazard for the villagers of Boria-Kharad in Gujarat.
Advertisement
<< EU Tourist Advisory Names 500 European Beach Spots To Be 'A...
Software To Communicate Emotions On Web Under Development >>

Air and water pollution from Orissa mining is endangering tribals as never before, but neither the federal nor the state government have bothered to do anything to alleviate the people's miseries.
Advertisement
News A-Z
A B C D E F G H I J K L M N O P Q R S T U V W X Y Z
What's New on Medindia

Noscaphene (Noscapine) Sanatogen Hearing Loss Calculator Blood - Sugar Chart Drug Interaction Checker Accident and Trauma Care Vent Forte (Theophylline) Post-Nasal Drip Find a Doctor Pregnancy Confirmation Calculator
This site uses cookies to deliver our services.By using our site, you acknowledge that you have read and understand our Cookie Policy, Privacy Policy, and our Terms of Use  Ok, Got it. Close
×

J&K Lakes, Including Dal, on the Verge of Extinction Thanks to Pollution Personalised Printable Document (PDF)