From a very Young Age, JFK Suffered from Chronic Low Back Pain 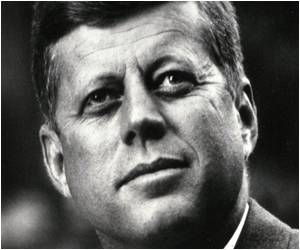 John F. Kennedy had chronic low back pain from a very young age, a new research has suggested.

A rheumatologist from Robert Wood Johnson Medical School and a clinical psychologist at the University of Michigan's Chronic Pain and Fatigue Research Center has written in an article that his back pain may have had a role to play in the President's death.

Kennedy was diagnosed with Addison's Disease, "spastic colitis," in addition to back pain.


Afton L. Hassett, Psy. D., a psychologist and associate research scientist in the Department of Anesthesiology at the University of Michigan Health System and co-author of the article has said that Kennedy exuded strength and vitality despite the fact that his general health was quite poor and his back and gastrointestinal pain were almost incapacitating.

Common back injuries include strains, sprains and fracture and they can occur due to pressure or trauma.
Advertisement
She said that if the president was presented for treatment today, the contemporary understanding of the mechanisms underlying chronic pain would support a different treatment approach.

JFK had low back pain almost constantly, perhaps starting with a minor sports injury in 1940.

However, a specific cause was never identified and a surgical cure not achieved, even after lumbosacral and left sacroiliac fusion surgery.

Hassett insists that the mechanisms underlying JFK's pain were likely complex involving a combination of peripheral factors such as narrowing of the L5-S1 disc space and dysfunction in central nervous system pain processing, or what we are coming to refer to as 'centralized pain'.

The authors have written in the article that several biographers have noted that Kennedy's back pain consumed a great deal of his time and effort and may have been a contributing factor in his assassination in Dallas in 1963.

They said that when the first bullet struck him in the back of the neck, his back brace held him erect, allowing the next and fatal bullet to strike the back of his head and his aching back was with him until the bitter end.

The research is published in Regional Anesthesia and Pain Medicine.

Understanding the basics about our back and our posture is very important in preventing back pain and improving workplace productivity.
Advertisement
<< Illegal Cancer Drug Trade in Hong Kong Driven by Mainland B...
Work Towards a Discrimination-Free Society, Say People Livi... >>

More News on:
Back Pain Spondylolisthesis Back Pain at Workplace: Prevention and Exercises Traction For Lumbar Pain Back Injuries