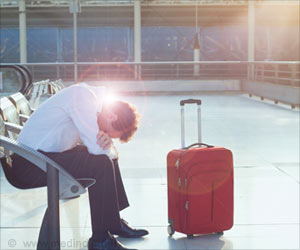 Jet lag, also called desynchronosis and flight fatigue, is a temporary disorder that causes fatigue, insomnia. Frequent travelling that causes jet lag could increase your risk of cancer because it tends to disturb our body clocks that are controlled by the same mechanism that causes tumours, finds a study.

The findings showed that people's internal body clocks have a major influence on cell multiplication and have the potential to prevent cancer.

Advertisement
‘Generally, people do not need a medical evaluation for a diagnosis of jet lag. If you have traveled across several time zones and feel the symptoms associated with jet lag, you likely have it.’

"Our internal clock is in sync with external light and dark cues, and prompts people's behaviour and activity levels," lead author Angela Relogio from the Charite-Medical University in Berlin, was quoted as saying by Daily Mail.


"Based on our results, it seems to us that the clock is likely to act as a tumour suppressor," Relogio added.

For the study, published in the journal PLOS Biology, the team analysed a protein known as RAS, which is inappropriately activated in around one quarter of cancerous cells, in mice.
Advertisement
RAS which controls cell multiplication in the body also influences people's internal body clocks or circadian rhythm.

This occurs via two proteins -- INK4 and ARF -- that are known to suppress cancer.

"One cannot stop wondering whether disrupted circadian timing should be included as a next potential hallmark of cancer," Relogio said.

Previous study had noted that cell shape fluctuates over time, determining their lifespan and could be linked to the onset of cancers'.

Changes in the biological clock have also been known to increase the risk of heart diseases and diabetes.

Why Cant the Body Adapt To Shift Timing, Jet Lag?
Abnormal pressure on the human body caused by shifting time schedules due to air travel, work ......

Treating Jet Lag Using Retinal Cells
A group of cells in the retina directly affect the biological clock by sending signals to brain ......

Melatonin
Melatonin has finally been accepted as effective treatment for insomnia and other sleep disorders. J...