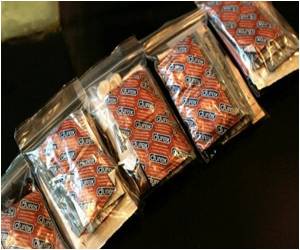 Having come out with bacon flavored shaving cream; J&D's Foods are now taking their love for bacon to another level, by offering bacon flavored condoms.

Writing in a statement, the American food company claimed that it was the 'most anticipated product of the summer', citing a study which showed '10 out of 10 people prefer the smell of Bacon to coconut.'


The company added that there are also plans to bring out bacon flavored sunscreen, lip balm, envelopes and even a bacon-themed coffin.


"Truly the new standard of animal protein themed prophylactics Bacon Condoms are proudly made in America of the highest quality latex and rigorously tested to help ensure the utmost reliability and safety for when you're makin' Bacon. Science has shown us that 10 out of 10 people prefer the smell of Bacon to coconut which makes this the most anticipated new product of the summer", the statement read.

Inventor of Next Generation Condom to Get $100k from Bill and Melinda Gates Foundation
Melinda and Bill Gates Foundation will be awarded $100,000 for anyone who is able to come up with a ...