Jasmine and Cigarette Smoke: The Allure of Greek Open-Air Cinema 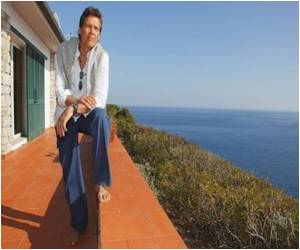 Summertime in Greece means open-air cinema, a well-loved tradition for nearly a century with a whiff of jasmine, cigarette smoke and the furtive shadow of a cat darting across the silver screen.

In the projection room of "Palas" ("Palace"), one of Athens' oldest movie theatres in the middle-class district of Pangrati, second-generation owner Matthaios Potagas is a whirl of motion that belies his gaunt 86-year-old frame and white beard.

As the latest group of moviegoers settle into their seats, he checks the reel, readies the projector and throws a fresh set of drinks into the cooler, ready to sell.


"I do everything except act," he jokes. His sister sells the tickets and he says that for all purposes, he was "born in this cinema."

Potagas' father and uncles first opened the "Palas" in 1925, three years before his birth, and the place is essentially unchanged to this day.
Advertisement
Past the blue-and-red neon marquee at the entrance, a staircase leads to a leafy terrace with two long, narrow rows of folding chairs.

"Lovers prefer it here," winks Potagas, who has been running the business since 1953 and hopes his grandson will carry the family torch.

Open-air cinemas are part of summer life in Greece, a fact conceded by many indoor screen owners who prefer to shutter shop and take a break until September.

This year, there are around 90 terraces and gardens serving as open-air movie theatres in the greater Athens area.

"Summer cinema is romantic," says Eleni Barka, a woman in her thirties about to enjoy an early evening performance.

"It's a completely different experience to being in a dark room theatre. Here you can see the sky and the moon," she tells AFP.

"When the weather heats up in Greece, the first thing you think of is the open-air cinema," she adds.

"Consider that in the sixties, there were 600 open-air cinemas in Athens," says Dimitris Fyssas, a journalist and author of a comprehensive study on Greek movie theatres in the capital dating to 1896.

"As few families had access to television at the time, this was the main source of entertainment," he adds.

"Land was cheap, so it wasn't difficult to find a parking lot and a projector to get started," Fyssas said.

Pangrati alone boasted 10 screens, recalls Dia Kotira, a retired singer and owner of the "Cine Oasis" in the district.

"Life changed with television, people became accustomed to staying at home," says Dia, who lives in Switzerland but returns to Greece every summer to help her sister Maria run the "Oasis".

"But we have have regulars who remain faithful to us. In fact, many of these are gifts," she adds, pointing to a variety of trinkets decorating the cinema entrance.

Dia sits at the ticket booth, beneath a portrait of John Wayne. Maria, who lives above the cinema, runs the bar. Their projectionist Yiannis battles with the theatre's Italian-made projector, a 1965 antiquity operating on carbon arc lamps.

"People prefer outdoor cinemas, everyone tells us," says Maria Kotira. "They wait for the summer to come and watch the films they missed during the winter. They truly love it."

In recent years, there have been efforts to spruce up the experience for moviegoers -- several screens now offer lounge chairs, cocktail bars and 3D technology.

But the other essential elements of the open-air experience in Greek summer -- the sound of cicadas, the sweet smell of honeysuckle and onlookers stealing a peek from neighbouring balconies -- remain the same.

China Enlists Film Prostitute To Arouse a Cinematic Renaissance
To arouse a cinematic renaissance and fend off a cultural onslaught from Hollywood, China is ......

LGBT Community Organizes Film Festival in Guwahati
The LGBT community in Guwahati, Assam, is organizing a three-day film festival in the city to raise ...

Development of Bacterial Biofilms in Arteries Linked With Increased Risk of Heart Attacks During Stressful Periods
Hormones released when a person suffers from stress, emotional shock, or overexertion can lead to .....