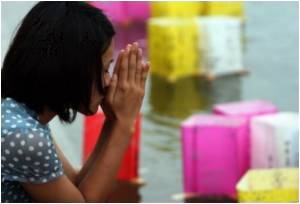 Japan's tsunami not only swept off the buildings but also the hopes and dreams of many youngsters In Japan. Honami Suzuki graduated from high school just before the huge wave bore down on her home. At just 18 years old she has her whole life ahead of her and was looking forward to a place at a vocational school where she would learn the art of cooking. "I don't think I can do that now," she told AFP. "It was my family that would have had to pay for it, but they won't be able to afford that now.

"I think I'll just have to try to find a job straight away. I hope it will still be something to do with food, but I don't know. There isn't much left around here any more."

A lone pine tree stands on the shore of a tsunami-wrecked Japanese city, a symbol of hope and defiance for people who have lost everything.
Advertisement

Her friend and fellow high school graduate Shiori Hosoya has also abandoned any idea of staying in education.

But jobs are going to be hard to come by.

The EU may move to strengthen controls on imports of Japanese food to include checks on the presence of plutonium.
Advertisement
Labour authorities in the three hardest-hit prefectures -- Miyagi, Fukushima and Iwate -- have received around 150 calls from companies and new graduates about the cancellation of job offers or delays in employment.

Companies, often required by law to take on a specific number of new employees each year, have contacted authorities to explain their current difficulties in recruiting.

"In the past, companies were reluctant to hire people because of the economic slump," said Yasuo Chikugo, an official from the Iwate Labour Department, referring to Japan's extended period of financial malaise.

"Now some of the companies themselves have disappeared. There are tough times ahead for new graduates."

Suzuki and Hosoya have tried to keep themselves busy since their homes were wrecked by the enormous waves. Both have been helping out at the refugee centre set up in their local junior high school.

"When we have free time, we come down here to the town," said Suzuki. "We're looking for useful things."

"We're short of these at the school. I found them near my house," she said, pointing to an area of splintered wood and mangled cars.

They are surprisingly sanguine about what they may have lost: the alternative life they could have had one day with qualifications that might have led to better-paying jobs.

"You can't think about before," said Hosoya. "I've still got my life and my friends. That's the important thing."

In Higashimatsushima, another devastated city, a total of 146 youngsters graduating from Yamoto Daini Junior High School pledged to do their best as they embarked on a new, but uncertain, chapter in their lives.

"The disaster changed our lives and we lost many things," Kodai Kubota told the graduation ceremony, which had originally been scheduled for March 12, the day after the tsunami swept over the northeast coast, killing more than 12,000 and leaving more than 15,000 missing.

"But we also gained many things," Kubota said. "We think we can overcome future difficulties with what we have learned."

The school is one of the relatively lucky ones along the coast -- none of its students have been confirmed dead and only one is still unaccounted for.

Education chiefs say they are making special preparations for the new school year, including mulling the establishment of schools with dormitories for the as-yet unknown number of children orphaned by the disaster.

The Yamoto Daini school buildings, some of which were slightly damaged in the quake and tsunami, have been turned into an evacuation centre, a temporary refuge for hundreds of people who lost their homes.

"Nothing can be harder than this disaster," said Shizuku Abe, another graduate. "I will never forget what has happened and will use what I have learned to overcome future difficulties."

Fellow graduate Kento Takahashi said he would like to become a teacher "to hand down stories of the disaster to the coming generations for the sake of the many victims."