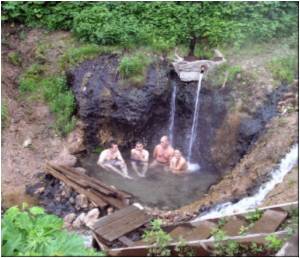 Until two weeks ago, the beach resort of Okumatsushima was a thriving stop on the Japanese tourist trail when a huge tsunami virtually wiped it from the map.

On a summer day, thousands would visit the resort's pristine sands, many of them staying in the guest houses that dotted the shoreline on Japan's picturesque northeast coast.

They came to gather shellfish or take boat tours of pine-covered islands and eat the oysters produced in the bay.


But on March 11 the town's tourist industry was washed away by the huge waves that swept inland, shattering buildings, lives and jobs.

"There were people staying here on that day," said Mariko Sugawara, who was working at Tanpo no Yado, a four-storey hotel just 50 metres (yards) from the beach.

Medical Tourism has become a serious enterprise in India over the last two years. However some hospitals have been practicing it for quite a few years.
Advertisement
"About 200 people climbed up to the roof to take refuge from the waves," she told AFP outside the ruins of the building.

"Thankfully everyone here was safe."

They were the lucky ones. Much of the rest of the town of Okumatsushima was crushed by the waves that engulfed the coast.

Whole guesthouses were scrubbed out and cars were hurled into the river.

The train station, where a sign still forlornly advertises tourist information and souvenirs, is a jumbled mess; the tracks that connected it to other destinations along the coast are torn and twisted.

Half the jagged shell of a metal shipping container lies in the soft sand of the beach where children once played.

Local government official Takashi Takayama said the area's main draw, the dramatic cliffs on the island of Miyatoshima, was now cut off.

"I think it will be a while before the tourists come again," he said.

"The bridge to the island has been damaged, so until that has been repaired I don't think we'll see many people."

Okumatsushima felt the full force of the tsunami that raced in from the sea after the 9.0 magnitude earthquake two weeks ago, leaving more than 25,000 people dead or missing nationwide.

The town's more famous neighbour, Matsushima, escaped the wrath of the waves, sheltered by the pine-covered islands in its bay that draw so many of the region's tourists.

Only minor damage caused by flooding was apparent when AFP journalists visited the resort.

Japan's tourism industry is staggering under the effects of the nuclear emergency at Fukushima, where workers are battling to bring reactors under control.

Droves of foreign tourists have cancelled trips following the confirmation that radiation from the crippled plant has been found in food.

The localised effects of the devastation wreaked by the tsunami are set to compound these problems.

"Economically, the impact of the tsunami here will be large," said Sugawara.

"I'm sure there will be lots of people who will be afraid to come to the area and I think people will be concerned for their jobs," she said. "I don't know what the future holds."

A spokesman for Japan Post, which owns the Tanpo no Yado hotel chain, said there was "no prospect" of resuming operations in Okumatsushima.

And the outlook is similarly bleak for many of the 260 people working in the town's 43 guesthouses and hotels.

Shinji Shiga, who oversees tourism in the town for the local authority, said there was no plan yet in place to revitalise the sector.

"Okumatsushima was devastated by the tsunami, but we do not have an overall picture of the damage," he said.

"We don't know yet how we can restore the industry. In Miyatoshima, many people were able to flee to higher ground so their efforts will be key."

For those who live in the town, where spending by the million-plus mostly domestic visitors a year is key to economic survival, the sea is a blessing and a curse.

Nobuhiro Kimura says tourists are drawn to the area because of the beauty of the coast and the ocean's bountiful harvest of oysters, abalone and seaweed.

"The summer here is lovely," he said.

"But the tsunami was a frightening thing. Even if it is only a once in a hundred years event, it's frightening."

Sinopril (2mg) (Lacidipine) The Essence of Yoga Vent Forte (Theophylline) Diaphragmatic Hernia Iron Intake Calculator Blood Donation - Recipients Find a Hospital Blood - Sugar Chart Drug Side Effects Calculator Find a Doctor
This site uses cookies to deliver our services.By using our site, you acknowledge that you have read and understand our Cookie Policy, Privacy Policy, and our Terms of Use  Ok, Got it. Close
×