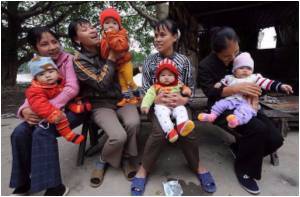 New census data has found that Japan's greying population of around 128 million grew by just 0.2 percent over the past five years, the slowest rate of growth since records began in 1920.

The number of people in Japan stood at 128.06 million last October 1, according to the government, which expects the population to roughly halve on current trends to 60 million by 2100.

World Population Day which falls on July 11, 2010 was instituted by the United Nations Population Fund (UNFPA) in 1989 as a conduit to create awareness on the issues concerning population.
Advertisement

The population has been declining year-on-year since 2007, and Japan last year lost the mantle of world's second-biggest economy to a rising China.


The 2005-2010 census figures reflect "a drastic change in our nation's social structure -- a decline in the birth rate and a gain in the mortality rate", an official at the ministry of internal affairs and communications said.

World Population Day draws attention to tackling population related issues in an over crowded world.
Advertisement
"It will be no surprise if we see the population decline for the first time in the next census, which will be carried out in five years," the official said.

Many young people have put off starting families, seeing it as a burden on their lifestyles and careers. A slow economy and tough employment conditions have also discouraged young people from having babies.

The World population today is 6,604,123,988. On the World Population Day the theme is Men as partners in Maternal Health
Advertisement
<< Sex Addiction - Disease or Just a Convenient Excuse?
During Childhood, Language Use can Go on a Roller-Coaster R... >>

Sanatogen Selfie Addiction Calculator Indian Medical Journals Color Blindness Calculator Drug Side Effects Calculator Drug - Food Interactions Find a Doctor The Essence of Yoga Hearing Loss Calculator Iron Intake Calculator
This site uses cookies to deliver our services.By using our site, you acknowledge that you have read and understand our Cookie Policy, Privacy Policy, and our Terms of Use  Ok, Got it. Close
×