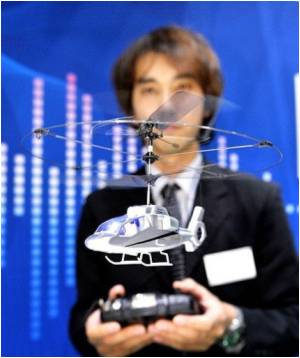 Japan gave us the Walkman, heated toilet seats and the pocket calculator, but its's path to innovative greatness is littered with failures such as the "walking" toaster and the TV-shaped radio.

These and other retro appliances are part of a treasure-trove offering a glimpse of futures that never happened on Japan's journey to becoming a worldwide byword for invention during the late 1950s and early 1960s.

Yahoo Japan will be marketing a genetic testing kit to its users, thus giving a real taste to users of what preventive medicine is all about.
Advertisement

"Way back before Cool Japan was an Uncool Japan," said Kenichi Masuda, 49, referencing the marketing slogan Tokyo uses to sell itself at home and abroad.


Masuda has made a life's work of gathering the also-rans in the race to consumer supremacy.

Witness Iwatsu Electric's "Both Phone" -- two telephones attached back to back with only one receiver, apparently to allow someone to make calls from either side. But only one at a time.

To find the best maitre d' in the world an international competition was under way in Tokyo.
Advertisement
Marvel at Fuji Electric's double-decked electric fan -- the "Silent Pair", which definitely is a pair, but not exactly silent.

Browsing Masuda's collection sends the viewer through a portal to a different time, a period when the "three sacred treasures" -- the television, refrigerator and washing machine -- were status symbols to which all self-respecting housewives in booming Japan would aspire.

But for those who could not afford a real television -- Japan's first domestically-produced set cost the equivalent of three years' salary for a mid-1950s high school graduate -- the next best thing was readily available.

The "Sharp Cinema Super" is a radio in the shape of a television and cost 10,900 yen -- a little more than a month's salary for an elite public servant of the time.

"The delight of having the impression of watching TV would, however, fade quickly with this still screen, " said Masuda, adding: "I bet the man who bought this was scolded by his wife."

Panasonic's television-shaped gas stove GSF-1 is the most expensive model among a range of gas heaters the company sold over 30 years.

"Is there any real meaning in this? No, but this shows how people admired television sets," he said as he showed AFP the stove, one of the 2,000 items he has amassed over nearly three decades.

Other marvels include the "satellite-type" washing machine -- a round metal pod with a handle that stirs dirty laundry in water and detergent.

The product was launched in 1957, amid public excitement over the Soviet Union's Sputnik, the world's first artificial satellite.

Sharp's "Quicky" -- a pair of electric scissors and Toshiba's prosaically named "CK-31A" electric can opener were both failures.

Hitachi's "Piano" is a desk-top electric fan that is, for no discernable reason, shaped like a miniature piano and is supposed to emit a gently scented breeze.

Not to be confused with typical hotel "conveyor belt" toasters, Toshiba's "walking-type toaster" has a slit entrance for the slice of bread, which is then "walked" vertically down inside the toaster on metal rails.

When the toast eventually emerges at the other end, it feels like a major achievement.

"This didn't sell. There's no way Japan's small kitchens had room for a product whose size and price were twice those of common models," Masuda said.

His personal favourite in this category is Toshiba's "Snack-3", a device that can warm milk while toasting a slice of bread and frying an egg.

"People may have wanted to have Western-Style breakfast at the time... though you would become tired of that fairly quickly," he said.

For Masuda, these quixotic gadgets show the bravery and idealism of Japanese companies in a high-growth era that was crowned by the 1964 Tokyo Olympics and the launch of bullet trains.

"They are adorable. You can see how they came about from companies pouring so much effort in to pleasing customers. It's just that sometimes, these efforts backfired," said Masuda.

"But they were serious products made by adults for adults."

Japanese consumer electronics evolved from this trial-and-error period to sweep the world in the late 20th century -- with Sony's Walkman standing as perhaps the epitome of Nippon Know-how.

But then it all went wrong.

Household names that appeared almost indestructible in the 1980s -- Panasonic, Sharp and Sony -- are shadows of their former selves, struggling to keep up with their South Korean and Taiwanese rivals.

For Masuda, these companies lost their nimbleness and their playful sense of adventure when they got too large.

"As they grew bigger and bigger, they became mindful of 'marketing,' 'profitability', 'safety' and the like. They may have become too slow to act," he said.

"But companies in this period were vigorous and had a 'go-for-it' spirit. They weren't afraid of failures."

So how do they get back to their roots?

That, admits Masuda, has him stumped.

"If I knew that, I'd be a company president."

Source: AFP
Advertisement
<< Benefits Of Bisphosphonates In People With Osteoporosis
Couples Page on Facebook from Today >>

Calculate Ideal Weight for Infants Turmeric Powder - Health Benefits, Uses & Side Effects Nutam (400mg) (Piracetam) Drug Side Effects Calculator The Essence of Yoga Blood - Sugar Chart Blood Pressure Calculator Accident and Trauma Care Find a Hospital Daily Calorie Requirements
This site uses cookies to deliver our services. By using our site, you acknowledge that you have read and understand our Cookie Policy, Privacy Policy, and our Terms of Use