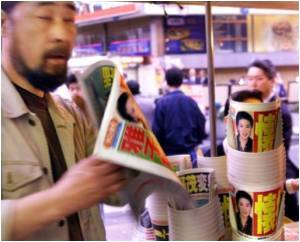 Japan's number of known child pornography victims surged by half last year, data showed Thursday, a new record in a country where it is legal to possess sexually explicit images of children.

Despite its production and distribution being outlawed, Japan is seen as a major global source of child pornography in photo and video form, and authorities have stepped up efforts to contain the problem.

'Skins' Has Not Violated Any Child Pornography Laws, MTV Insists

The teen drama 'Skins' has not violated any federal child pornography statutes after complains of exploitation from a media watchdog group, MTV has stressed.


A total of 618 children under 18 were recorded as having fallen victim to pornographic exploitation, up 52.6 percent, police said.

The widespread availability of online child pornography in Japan is further fueling the problem in a country where general crime levels are low.

Researchers from University of Hawaii have suggested that legalizing child pornography could aid in reducing the rates of child sex abuse.

The police agency also said that registered cases of child abuse in Japan, including beatings and neglect, in 2010 increased 5.7 percent from the previous year to 354 cases. The number of known victims rose 4.3 percent to 362, of whom 33 died.

Both figures were the highest since such data was first compiled in 1999.

Campaigners this month renewed their calls for the government to clamp down on child pornography.

"As consumption is not criminalized, demand is always going up," said Junko Miyamoto of non-profit group ECPAT/STOP Japan. "Also, the content of child pornography is getting worse, more cruel."

The head of the Polaris Project, a US-based anti-human trafficking group, last week told Japanese lawmakers that "significant percentages of the images involve children being gagged, bound, tied with ropes or even blindfolded".

He said he has sent a letter to the FBI outlining his concerns and identifying two specific categories, which he believes violate federal obscenity laws.
<< The Low-Cost Water Filter - For Use in Emergencies
Beer to Become an 'Alcoholic Drink' in Russia >>