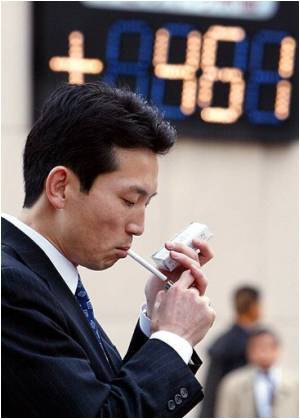 Faced with the record tobacco price rise set for Friday, Japanese smokers are doing everything they can to stock up for the long and hard "winter" ahead - stopping, stockpiling and even stealing when deemed necessary.

Retailers are making the most of the buying frenzy in the build up to what will be a more than 25 percent price rise for some brands as the government raises cigarette tax.

Kidney Health Australia has decided to give its assent to proposals to increase the tax on cigarettes.
Advertisement

"Have you finished stocking up?" read signs at Lawson stores, a major convenience chain in a country considered a smokers' haven. Tokyo welcomes smoking in bars and restaurants but has banned it on pavements.


"We are expecting a rush, especially the day before the price hike," Lawson spokeswoman Yayoi Sugihara said without giving sales figures.

"Each shop has expanded its cigarette stock."

A suggestion for hike in tax on cigarettes is gathering momentum in Australia, even as a study shows that anti-tobacco ads fail to discourage the youth.
Advertisement
The hike has also led to an increase in the number of burglaries to steal cigarettes, reports said.

In the rural city of Mooka, 100 kilometres (60 miles) north of Tokyo, a 47-year-old jobless man was arrested on Sunday for trying to run away with two cartons from a supermarket.

The government has authorised Japan Tobacco (JT), which dominates the country's cigarette market, to raise the prices of cigarettes by around 100 yen (1.2 dollars) per pack of 20.

The government reportedly hopes to eventually raise the prices to around 700 yen a pack, close to levels in Europe and North America.

The move is aimed at offsetting an increase in the tobacco tax by a record 3.5 yen per cigarette, or 70 yen per pack, a move proposed by former Prime Minister Yukio Hatoyama last year to discourage smoking.

Around 6,800 people are estimated to die from lung cancer or heart disease caused by passive smoking annually in Japan, the health ministry said Tuesday.

But while many Japanese have said they plan to quit, the hike is also encouraging cigarette buying instead of dissuading smokers.

JT has increased cigarette shipments in September by one month's worth, or about 12 billion sticks, in anticipation of greater demand.

Convenience chain FamilyMart reported that cigarette sales had almost doubled from a year before in the first 25 days of September.

One person was reported to have snapped up 100 cartons of cigarette packs worth 300,000 yen at a tobacco shop in Tokyo's working-class district of Ota.

He said he wouldn't stop smoking even if the price was 1,000 yen (12 dollars) a pack. "I will expand my stock in advance to last my lifetime and keep it all in the refrigerator," he said.

But the price hike is also helping smokers kick the habit.

Many stopped smoking in mid-2006 when prices were raised by smaller margins -- mostly by 20 yen per pack.

A recent poll showed 58 percent said they would give up after Friday's hike.

"The margin of price increase is larger this time and there are more people who decided to quit because of the impact on their pocketbooks," the Japan unit of major US health care firm Johnson and Johnson said.

The ban proposed by the World Health Organization on the use of cloves and other flavours in cigarettes has been opposed by Asian tobacco growers.
Advertisement
Advertisement

Smoking is injurious to health, but it sure is a tough addiction to stop. Cure yourself with the power of ...
This site uses cookies to deliver our services.By using our site, you acknowledge that you have read and understand our Cookie Policy, Privacy Policy, and our Terms of Use  Ok, Got it. Close
×