Japan to Ban Sales of Incest Comic to Minors 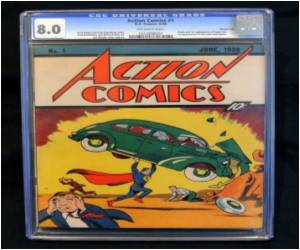 The Tokyo government is to ban sales to children of a manga comic that depicts incestuous relationships, an official revealed.

The first time expanded rules on sexual content have been invoked. "Little Sisters Paradise! 2", which was published last month, will be classified as an "unhealthy publication" that must be kept out of children's reach.

Meet the Superman Addict Who Spent 4,400 Pounds to Look Like Comic Book Superhero

The comic, a spinoff from an adult-orientated computer game with the same title, says on its cover: "More naughty days of a brother and five sisters."


A panel of experts for Tokyo Metropolitan Government "has reached the decision that (this manga) meets the criteria. We are moving to publicise the decision" formally on Friday, said an official in charge of youth affairs.

Manga is a style of Japanese comic book typically aimed at adults as well as children.

The ruling only affects stores in the Japanese capital but does not bar them from stocking the title, which will remain freely accessible to those aged 18 or older in adult sections of bookshops.

"Little Sisters Paradise! 2" is the first publication to fall foul of the 2011 amendment that expanded the rules to cover pictures or text that "glorifies" incest.

The possession of pornography involving children is not illegal, but its creation and distribution has recently been criminalised.

It is not uncommon to see adults on trains reading manga that would be deemed risque in other societies.

However, strict rules mandate that genitalia must be obscured.

Manga images, while they might be mere drawings, can be considered pornographic under internationally shared norms, said Hiromasa Nakai, spokesman for the Japan committee for UNICEF.

"Many people agree that there are horrible manga images are out there and they need to be dealt with," he said.

The move to tighten rules on sales of explicit material to children came partially in response to criticism from foreign campaign groups.

But it faced resistance at home from manga artists, free-speech advocates and publishers, who said it would impinge on freedom of expression and allow authorities to make arbitrary decisions about art.

Strong societal memories of strict state censorship in the run up to Japan's disastrous entry into World War II play into such debates, with dissenters warning of the danger of allowing the government to control the press.

Manga Comics Get Popular in Algeria

Manga comics, which are flourishing in Algeria, are massively popular in Japan, almost a cultural phenomenon
<< Experts Warn Many Schools in England are Neglecting Students...
Structural Secrets of Enzyme Used to Make Anti-Cholesterol ... >>

News Archive
News Resource
News Category
Couples, Beware! 8 Expectations That can Break Your Relationship Bad Posture While Using Mobile Phones can Cause Back and Neck Pain Co-workers: As Role Models for Healthy Eating and Lifestyle Habits Shameful Surprise: Digital Make-up Mirror Brings a Sense of Fakeness and Embarrassment Signs of Insecurity in a Relationship
More News
Sign up for Wellness Consult a Doctor Sign up for Selfcare