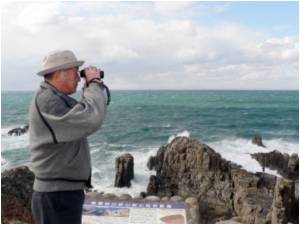 More than 100 people showed up and thousands more listened via the Internet to a recent suicide prevention workshop in Japan, a country where over 30,000 people kill themselves every year.

"Please, wait a minute before you hang yourself or start mixing chemicals and pills," Koji Tsukino pleaded with his audience. "Save just a tiny bit of energy to make that one click on the Internet or one phone call to seek help."

The Tokyo event was called "Stop Suicide! Starting from Rock Bottom", and Tsukino knows what he is talking about. At age 45, he has survived alcoholism, overdosed on drugs, slashed his wrists and tried to hang himself.


"I have somehow survived," he said. "But many people I know have died from drug overdoses or leaping from buildings."

Japan has one of the world's highest suicide rates, according to the World Health Organisation -- a statistic that has become a matter for national political debate.

Japan is the most holiday-deprived nation in the developed world, with its workers taking just an average nine days off a year, says a new survey.
Advertisement
The annual suicide rate per 100,000 is 35.8 for men -- the more at-risk gender -- according to WHO figures, compared with 10.1 in Britain. There are seven countries with a higher rate, including Belarus, with a figure of 63.3.

Japan's new Prime Minister Naoto Kan has repeatedly raised the suicide numbers as proof of what he believes is wrong with the country, in speeches ahead of parliamentary upper house elections this Sunday.

The number one goal of politics, Kan, a former leftist social activist, has declared, is to "minimise unhappiness".

He has pointed at eroding family and community ties, youth overnighting in Internet cafes and laid-off workers sleeping rough in parks, amid a sense of social isolation and an economic malaise that has lasted two decades.

"The Japanese economy has remained stagnant for nearly 20 years since the bubble economy burst at the beginning of the 1990s," Kan said in his first policy address after taking office a month ago.

"As a result, the people have lost their former self-confidence and are downcast in vague unease about the future."

Many observers have pointed at the changes in Japan since its heady boom days and a lingering sense of malaise and anxiety.

In a country where companies during the post-war "economic miracle" years routinely guaranteed jobs for life in return for their employees' work and loyalty, unemployment has crept above five percent.

As the country's wealth gap has grown, homeless people, a once relatively rare sight, have become more common in Japanese cities and a generation of young people have been getting by on low-paying temporary jobs.

"So many Japanese are living on the edge," psychiatrist Rika Kayama said at the anti-suicide workshop. "Life itself is like hard labour in Japan."

Masahiro Kan, researcher at Hokkaido University Public Policy School, said: "Japanese society's values have shifted toward pursuing your own maximum self-interest and toward those of free market competition.

"I believe the stagnant mood of Japan derives from people's helplessness and their feeling that neither society nor the government will help them."

As Japan's society ages and shrinks, many worry for the future of the economy -- set to be overtaken by China's soon -- and whether a shrinking tax base will pay for pensions.

Kan has pledged to pursue a "third way" -- to restore growth, reduce a huge public deficit and safeguard social security.

He wants to move away from the heavy infrastructure spending of the 1980s and 90s, and the "excessive market fundamentalism" of former conservative premier Junichiro Koizumi.

Japan is now crawling out of its latest recession, with the government forecasting growth at the fastest rate in a decade this fiscal year. But many thousands are unlikely to benefit, say activists.

Growing poverty has hit children, single mothers and the elderly particularly hard, with as many as 750,000 people now said to lack food security, according to Charles McJilton, who founded Japan's first food bank.

Aya Abe of the National Institute of Population and Social Security Research talks of "invisible poverty."

"If you go to any public school and ask the teachers, you will hear stories about children who bathe just once a week, who have to share a pencil with their brothers. They may not be begging in the street... but they're there."

A modern Japanese leader should ideally be an epitome of ancient values such as - capacity to march 100 kilometres in 24 hours, fight using the way of the sword and serve tea with grace.
Advertisement
<< Japan's Sumo World Bodyslammed: Scandal After Scandal Surfa...
Incentives Motivating Doctors to Work in Rural Areas Recomme... >>

Bosses in a Japanese city have come to the defence of their decision to ban beards at work places by saying they are being environmentally friendly.
Advertisement
News A-Z
A B C D E F G H I J K L M N O P Q R S T U V W X Y Z
What's New on Medindia