Two weeks' paternity leave may not seem like much, but for Hironobu Narisawa, the 44-year-old mayor of a Tokyo district, it is a leap into the future for Japanese society.

Next month he will become Japan's first local government chief to take time off work to look after a child, a move he hopes will encourage other men to do the same in a nation struggling with a low birthrate.
Advertisement 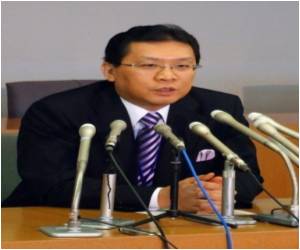 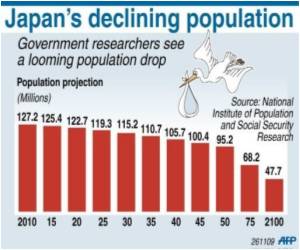 A chart showing the projected decline in the Japanese population

Narisawa, the mayor of Tokyo's Bunkyo Ward, will swap his desk and PC for the world of sterilized bottles, baby formula and nappy changes for his first child, who was born on February 5.


"I want to take time to raise my son and give him a lot of love," he told a nationally-televised news conference.

"I wanted to experience both the importance and the difficulties of child raising. I want to set an example that other men will follow."
Advertisement
Japanese law allows either parent to take leave of up to one year after childbirth, but almost all of those who do so are women, a reflection of traditional gender roles that remain entrenched.

No male employees of Bunkyo ward are currently on paternity leave, the news conference was told. Nationwide, only 1.2 percent of fathers take advantage of paternity leave.

Proud dad Narisawa is on a mission to change that and follow in the footsteps of male politicians elsewhere who have taken out time for their tots, among them former British premier Tony Blair.

"In some European countries such as France, it is not unusual for fathers to take three to five weeks off for child-rearing," Narisawa said. "It is a matter of political systems and this should be seriously discussed in Japan."

Japan has one of the world's lowest birth rates. This, coupled with its negligible immigration rate, is causing a headache for pension planners, with a decreasing number of workers having to support a growing number of retirees.

The problem is an existential one for Japan, the world's number two economy. Its population of about 127 million is set to decline to 95 million by 2050 on current trends.

In a bid to halt the decline, Japan's new government, which ended half a century of almost unbroken conservative rule when it took power last September, has embarked on a campaign to make the country a more gender-equal and family-friendly nation.

Prime Minister Yukio Hatoyama has promised free high school tuition for all, and his centre-left Democratic Party of Japan has also pledged to boost child allowances, giving 140 dollars a month per child to all parents of pre-high school children and vowing to double that amount next year.

Japan even has a State Minister for Declining Birthrate and Gender Equality, a post occupied by Mizuho Fukushima, the leader of junior coalition partner the Social Democrats.

She has said that societal perceptions have to change in order to make having babies more attractive again, pointing out that it is still common for companies to pressure pregnant women to resign.

"Unfortunately 70 percent of women quit their jobs once they have a child. We want them to continue working throughout their active lives," Fukushima told AFP in an interview last year.

National government officials praised mayor Narisawa for taking the lead on a more balanced approach to work and parenting.

"Surveys show the main reason so few men take paternity leave is the lack of understanding from superiors and colleagues," said Yumiko Jozuka, who heads the national government's welfare ministry.

"It's wonderful that someone with social influence, such as the head of a local government, is taking some leave because it helps promote social awareness," she said.

But even with high-profile advocates like Narisawa, a sudden baby boom seems unlikely in Japan any time soon.

A survey last year found that more than 40 percent of Japanese people do not feel the need to have children after marriage.

Source: AFP
TAN
Advertisement
<< Tourist Advisory: Goa Is a 'No Topless' Zone
Maldives Tees Off Global Warming Battle With Plans for a Fl... >>

Few Swedish Fathers Utilize Opportunity to Take Paternity Leave
Swedish fathers enjoy one of the most generous paternity leaves in the world but few dads take ......

Aussie Men Up in Arms Against Proposed Paternity Law, Unjust Child Support System
A men's lobby group in Australia objected Tuesday to a planned law making it an offence to sneak a ....

Advanced Maternal Age Runs Risk Of Autism In Child
Advanced maternal age is linked to a significantly elevated risk of having a child with autism, ......