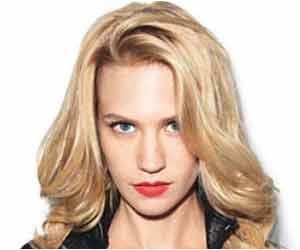 The 33-year old star, January Jones, known for her role in Mad Men, has jumped down to size six by resorting to a diet of juices and raw vegetables. The actress has dropped down by two dress sizes to get into the role of Emma Frost for her upcoming comic film X-Men.

Her diet schedule was known as the 'BluePrint Cleanse'. It consisted of 6 bottles of juice per day. It amounted to 1,100-calories per day. The diet plan claims a 3-day juice cleanse which helps to purge 'toxins' from your body.

Designer Donatella Versace has described Jones as 'a perfect Versace woman for the 21st century'. He said, "She is chic and elegant but deeply sensual too."

Diet pills are flooding the market by millions. The positive side of diet pills to most people is that they achieve their objective of losing weight. Medical reviews are against the use of diet pills.
Advertisement
<< Researchers Moot Idea of Outdoor Smoking Controls in New Ze...
No More Spam SMS, Thanks to SMSAssassin >>

Nutam (400mg) (Piracetam) Find a Doctor Drug Side Effects Calculator The Essence of Yoga Noscaphene (Noscapine) Vent Forte (Theophylline) Color Blindness Calculator Daily Calorie Requirements Indian Medical Journals Diaphragmatic Hernia
This site uses cookies to deliver our services. By using our site, you acknowledge that you have read and understand our Cookie Policy, Privacy Policy, and our Terms of Use