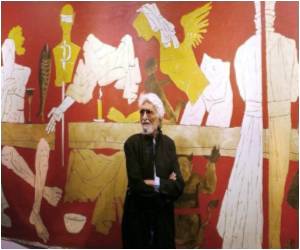 Royalty rubbed shoulders with the rump of India's caste system at the Jaipur Literary Festival this year as crowds flocked to India's "pink city" for an annual dose of celebrity and culture.

Bright sunshine and a roster of 220 authors and performers, including a clutch of Nobel, Booker and Pulitzer prize winners, lured tens of thousands of book lovers to the grounds of the Diggi Palace -- a converted 19th century mansion where the event has been held since 2006.

Japanese author Kenzaburo Oe, winner of the 1994 Nobel Prize for Literature,heads the longlist for the Man Asian Literary Prize, it was announced.
Advertisement

Billed as the world's largest "free" literary festival, the Jaipur event prides itself on its open door policy, eclectic mix of speakers and informal atmosphere which spurns VIP enclosures.


Thus the former Maharaja of Kashmir, Karan Singh, who helped open the 2011 festival, could later be seen sitting among the crowd, taking in a poetry recital and signing autographs.

British food writer Nigella Lawson has expressed concern on how an increasing number of young people are suffering from eating disorders as they try to maintain a thin figure.
Advertisement
"The great thing is that you can move from a debate on the role of Indian women to another on the future of American fiction with Junot Diaz and Martin Amis," said Indian novelist Abha Dawesar.

"There is no ranking here among the writers, and it's great that this is happening in Jaipur rather than a major, cosmopolitan city like Delhi or Mumbai," she told AFP.

This year's festival was slightly clouded by a vitriolic spat just days before it opened between one of its co-founders, best-selling British author William Dalrymple, and the political editor of Open news magazine, Hartosh Singh Bal.

In an article, Bal questioned how Dalrymple, a white middle-aged Scot, had established himself as a "pompous arbiter of literary merit in India".

Hurt by the attack and an unflattering cartoon of him in colonial-era regalia, Dalrymple noted that two-thirds of invitees to Jaipur were Indian and accused Bal of "reverse racism".

The row had its roots in a long-standing and sensitive debate surrounding the commercial and critical dominance of the English language in Indian literature -- a bias that some say is reflected in the Jaipur line-up.

"The vernacular Indian writers are virtually invisible here. In some ways, English is still a colonial legacy, but there are wonderful Bengali, Maharati writers," said one festival-goer, film director Gautam Hooja.

"The way we celebrate art is because it's universal and it's a pity we don't have this exposure here," Hooja said.

"But the Indian reality is that English is still the language of the elite. In many ways, the festival speaks to the elite."

But festival co-director Namita Gokhale dismissed such criticism, pointing out that the 2011 festival had a focus on writing from northeastern India and boasted sessions in a host of Indian languages, including Hindi, Urdu, Sanskrit, Tamil, Bangla, Gujarati and Punjabi.

"Like every year, the festival is showcasing the strength and diversity of writing in Indian languages," Gokhale insisted.

Music is also a large part of the schedule, with performers including the lower-caste dalit (or "untouchable") singer Bant Singh, who had parts of both arms and a leg amputated after being beaten for daring to take a group of higher-caste men to court for raping his daughter.

The undoubted stars, however, were from overseas and included the Nobel literature laureates Orhan Pamuk and J.M. Coetzee, who drew packed audiences in venues that have struggled to cope with the event's growing popularity.

While barely 100 people turned up to the inaugural festival in 2006, more than 50,000 were expected to have passed through the Diggi Palace by the time the 2011 edition ends Tuesday.

Nevertheless, the event has managed to retain a degree of its intended informality that allows sightings of luminaries like the American, Pulitzer-prize winning novelist Richard Ford chatting with an enthralled fan over a cup of tea.

"Stars are lovely, but with no readers it would be a catastrophe," said Dalrymple.

"Here it's a melting place for writers and a crowd of readers. It's a showcase of writers to the world, sometimes pretty chaotic, and it's free!"

Drug - Food Interactions Sanatogen Find a Doctor Drug Side Effects Calculator A-Z Drug Brands in India Daily Calorie Requirements Selfie Addiction Calculator Nutam (400mg) (Piracetam) Vent Forte (Theophylline) Diaphragmatic Hernia
This site uses cookies to deliver our services. By using our site, you acknowledge that you have read and understand our Cookie Policy, Privacy Policy, and our Terms of Use