It's All About The Music For Gay Eurovision Fans 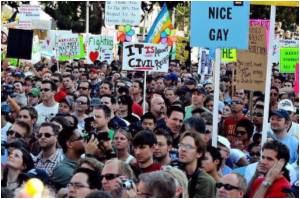 Eyebrows were raised when Finnish singer Krista Siegfrids ended her song rehearsal by kissing one of her female dancers.

Eurovision has been a staple of gay culture for decades in western Europe, where gay bars and nightclubs traditionally screen the event and drag queens often pay tribute to the kitsch outfits seemingly made for them.

But if the lesbian kiss stays part of the act in the Swedish city of Malmoe, it could pose a problem for public broadcasters in the socially conservative nations of eastern Europe.


Russia, winner of the contest in 2008, last year blocked plans for a gay pride parade in Moscow, and in neighbouring Ukraine, which clinched the top spot in 2004, lawmakers are mulling a bill that would ban "pro-homosexual propaganda".
Advertisement
It is a gamble Finland's Siegfrids may be willing to take: courting the pink vote could also boost support for disco anthem "Marry Me", which has already spawned a same-sex marriage-themed parody on YouTube.

The former reality show contestant said she hoped Helsinki would legalise gay marriage "as soon as possible", after the issue became the subject of a so-called citizens' initiative garnering hundreds of thousands of signatures.

In Sweden, which has been a pioneer in gay rights, the city of Malmoe has worked with the lesbian, gay, bisexual and transgender (LGBT) community to promote the Eurovision Song Contest.

It's a far cry from last year's bizarre row between Azerbaijan and its more staunchly Muslim neighbour Iran, which reacted angrily to an unlikely rumour that the country would hold a gay parade during the event.

A senior presidential administration official retorted that Azerbaijan does not even have a word for gay parade -- unlike Iran.

But although the competition's appeal to gay men is widely known, explaining it has never been easy.

"This has become the FIFA World Cup for gay guys," said Daniel Poehlmann, who was scheduled to speak at an international Eurovision Song Contest conference held at Malmoe University this week.

"It's not just about the glitz and glamour... Every country competes with a genre that's different from the next one," he added.

The 31-year-old student and translator first became "seriously involved" with Eurovision after joining a Facebook group in 2009.

"Now I have around 20 very close friends from this Facebook group, who travel to Eurovision each year," he said.

"If you go out to (the official party venue) Euroclub you normally assume that a guy is gay until he says otherwise."

Out of Poehlmann's Eurovision friends, around 15 were gay, but none of them had ever been in a relationship with another fan.

"Maybe it's because when you're this interested, it's nice to have a counterweight," he suggested.

Sensing that he might "overdose" on Eurovision this year, Malmoe's self-dubbed king of Eurovision will be returning to his alternative rock roots later this year.

"I've just booked tickets to the Off Festival outside Krakow in Poland, where my friend and I are going to watch the Smashing Pumpkins and My Bloody Valentine," he said.

Ronny Larsson, a journalist and Eurovision blogger for Swedish gay magazine QX, said that although no one had ever managed to fully explain the contest's popularity among gay men, he had a theory that might shed some light on it.

"A lot of other people are ashamed to listen to this type of music. But gay people have already come out, we've had to stand up for ourselves, what we are and what we like," he said.

"That makes it easier. Even if it's a bit embarrassing, it becomes such a minor issue for us."

There is also a faction within the community who hate the Eurovision Song Contest and Melodifestivalen, the annual series of shows to select the Swedish entry, he noted.

"What I find hard to accept is all these theories that it's because of the glitz and glamour, because it's such a cliche and that's never been the reason for my interest or my friends' (interest)," Larsson said.

Still, those looking for a bit of disco glamour at this year's gay club nights in Malmoe won't be disappointed, with Swedish Eurovision divas Loreen, Carola and Charlotte Perrelli each headlining gigs at nightclub Wonk.

All three have won the European contest at some point in their careers.

Club owner Joakim Nilsson booked one of the city's premier party venues for the event the day after Loreen won last year's competition in Baku, since Wonk's regular premises were deemed too small.

The busy schedule will leave him no time to attend the spectacular music fest in Malmoe Arena, but that may have been just as well.

"I don't listen to that type of music myself. I prefer house music," he said.