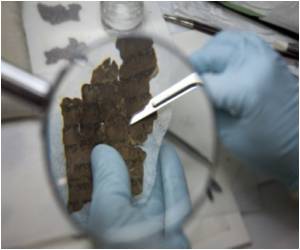 A famous book restoration institute in Rome treats Ancient manuscripts like hospital patients from having worked on all from the Dead Sea Scrolls to one of the oldest Korans in the world.

"Look at this poor man suffering!" exclaimed Marina Bicchieri, head of the chemistry department at the Institute of the Pathology of the Book, as she examined oxidation levels on the unique institution's most recent project.

Bicchieri was looking at a chart with the scientific analysis of one of the last letters written by a captive Aldo Moro, a former Italian prime minister who was kidnapped and killed by far-left Red Brigades militants in 1978.


Founded in 1938 to preserve Italy's priceless archives, the laboratory is tucked away inside a walled garden in the city centre. "This interdisciplinary institute was the first of its kind in the world," Bicchieri said.
Advertisement
The museum is filled with books suffering from the worst kinds of ailments -- including one with a hole as big as a fist eaten by termites or another riddled with bullet holes from the Battle of Monte Cassino during World War II.

The institute is the main point of reference for book and archive restoration in Italy but also does work for the Vatican and internationally.

One recent research project was carried out on fragments of Koranic manuscripts found in Sanaa in Yemen dating back to at least the eight-century.

Researchers are so keen they even donated blood to carry out experiments after finding that an ink with human blood had been used to write the Dead Sea Scrolls -- apparently because of its iron content to help stabilise colours.

"The main problems we see are linked to water, heat, dust and insects," said Flavia Pinzari, head of the biology department.

Their projects can be long-running but also emergency interventions.

"Following the recent flooding in Tuscany we were called by the local authorities to help them with flooded archives," Pinzari said.

"We told them to freeze the books since that stops the water from diluting the ink and micro-organisms from propagating. Then we can vaporize the frozen water avoiding damage linked to the water," she added.

The institute brings together scientists as well as literature specialists and artisans with a range of skills from traditional book binding, to the production of parchment, to the restoration of mediaeval illuminations.

"We consult old recipes, some of them mediaeval, to make colours and certain types of ink," Pinzari said.

They also rely on specialised firms in Italy and abroad, including one in Japan that makes a special paper used to "reconstruct" damaged pages.

It is painstaking work as shown by a restorer of one of the Moro letters when attaching a tiny fragment of the Japanese paper to one of the pages and fixed it with a special ultra-thin plastic film developed in Rome.

"Books doesn't like moving, travelling. They adapt to their environment even when it's not ideal and it is the change in temperature and humidity and manipulation that cause the majority of damage," said Bicchieri.

Pinzari added: "But even the most ancient books were written and made to be read. We therefore have to find the right middle ground between consultation and conservation."

Boys Like Less Challenging Books
A new study has found than boys read as much as girls, but prefer far less challenging books. ....