Italy sought to allay fears on Wednesday over high dioxin levels found in the milk used to make the country's famed buffalo mozzarella, after Japan and South Korea banned imports of the cheese. 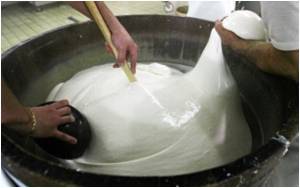 "There is an excessive and unfounded alarmism," Foreign Minister Massimo D'Alema said, cited by ANSA news agency. "The risks are very limited."

He said the dioxin cases were isolated and warned that overreaction risked causing serious damage. Sales in Italy have already dropped sharply.

Health undersecretary Gian Paolo Patta said: "The vast majority of the product is absolutely not affected by the dioxin. We are going to precisely determine which farms provided milk outside cheese dairy standards."

"The public should not let themselves be caught up by the kind of psychosis which gripped them during the bird flu scare," he warned.

South Korea and Japan suspended imports of Italian buffalo mozzarella after 66 buffalo herds were quarantined because of higher than normal levels of potentially dangerous dioxins found in buffalo milk.

"Yesterday we asked the Italian authorities to provide all the available information and we await a reply today or tomorrow at the latest," a commission spokeswoman said, adding her own call for the public to remain calm.

Most health experts quoted by the Italian media have said that the raised levels do not constitute a danger to health, but domestic sales have already fallen by 30 to 35 percent, according to the body that oversees the product.

Officials have previously said the contamination is probably linked to the region's chronic waste disposal problems, which saw thousands of tonnes of rubbish left undisposed of in past months.

But De Castro rejected that explanation in an interview with Wednesday's edition of the Corriere Della Sera.

"There is no link with the rubbish," he said.

Italy produces 33,000 tonnes of mozzarella per year from the milk of some 250,000 buffalo. Eighty percent is made in Campania, which is Italy's poorest region, according to figures from the Eurostat data agency.

Sixteen percent of all buffalo mozzarella is exported, with Japan importing 329 tonnes per year and South Korea 10 tonnes.

The region's chronic waste management problem is exacerbated by the local Camorra mafia, which controls many dumps in the area and makes a lucrative business out of shipping in industrial waste from companies in the north.

Contamination of the buffalo milk was highlighted in 2001 and 2003 after which the EU's executive arm had called on Italy to carry out regular testing, the commission spokeswoman said.

"The results for the years 2005 and 2006 showed no risks to human health," she told AFP. "We are awaiting the results of the 2007 analyses and explanations of the current situation."

"If the tests show any contamination, then the Italian authorities will have to take emergency measures to protect the internal market," she added.

Paranoia is a false belief where the individual feels unfairly targeted or persecuted by everyone else, leading to irrational suspicion and mistrust of others.

Xenophobia can be studied from two different perspectives. First as a medical condition phobia second as a cultural and social malaise. Xenophobia can manifest itself in several ways in a country.