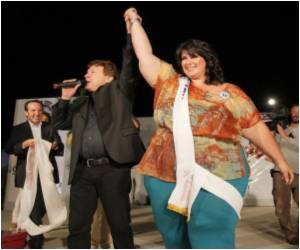 Italy has the honor of breaking the mold in presenting to the world an amply-figured woman weighing 170 kilos[375 pounds] as the new beauty queen.

Angela Scognamiglio said she was "very moved" when she was named Saturday night as the new "Miss Chubby" at the complex-free contest held in the Tuscany village of Forcoli, near the city of Pisa.

Worldwide Survey To Arrive At Ideal Concept Of Beauty

Beauty is of course in the eye of the beholder. Still size zero is a great attraction world over. Paradoxically D cup too. Still there is no consensus. Now an Australian attempt to find one.
Advertisement

"I am very moved, I feel as if I've won the lottery," the 33-year-old from Naples said after beating out 30 other contestants for the title.


As in all past 20 editions of the pageant, there is only one condition for entry: you have to weigh more than 100 kilograms, or 15 and a half stone.

The size zero trend seems to be heading out as more and more girls are preferring to sport an hourglass figure.
Advertisement
Contestants paraded before an audience of 2,500 at a local hotel on Saturday night, wearing gowns, or for those who cared to show more, undergarments. Some even dared a little glamour striptease.

But the crucial moment in the contest was the weigh-in, stepping onto a huge red scale where everyone could see the result -- with the roundest beauty clinching the title.

No big prize for the winner, just a huge cake to share around, and perhaps for all the contestants a boost in self-esteem in contrast to the mockery many obese face.

"When we get on a bus, people nudge each other, and whisper, making fun of us, and it's the same on the beach," said redheaded Marilena Amato.

"We are the victims of severe discrimination, it's as if we are second class citizens," said another contestant, Antonia Bartolo, a 37-year-old nurse from the Milan region.

The contest is also about "entertainment, a chance to get to know people who face the same problems I do," she added.

The contest's founder, Gianfranco Lazzereschi, says the event showcases other types of beauty in women.

"It is a showcase for full figures," he said, flanked by two contestants, "Why can't these two women show off? Why is it necessary to follow the dictates of what's beautiful?"

The full-figure pageant, says the founder, is a way to send a different message about beauty.

Majority of British men believe that curvy women are better in bed than their size zero rivals, says a survey.
Advertisement
Advertisement
This site uses cookies to deliver our services.By using our site, you acknowledge that you have read and understand our Cookie Policy, Privacy Policy, and our Terms of Use  Ok, Got it. Close
×