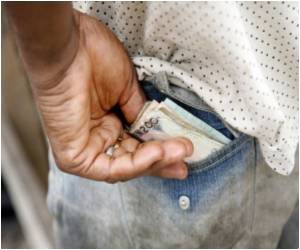 Italy is now engulfed by a wave of corruption scandals from the bribery racket in Venice to contract rigging in Milan.

Reports of widespread graft in northern Italy in particular have drawn comparisons with Italy's "Clean Hands" investigations of the 1990s, which saw top politicians jailed and swept away the country's post-war party system.

In a fresh embarrassment to the Karnataka state government, a number of people filed complaints with the Hassan Town police station
Advertisement

Two decades on, Italy still comes third-to-last in Transparency International's European rankings -- ahead of just Bulgaria and Greece -- and corruption costs the taxpayer some 60 billion euros ($80 billion) per year.


The economic crisis which sank Italy into its worst post-war recession "makes these fresh scandals even more intolerable in the eyes of the citizens," Michelangelo Anderlini, Transparency's deputy head in Italy, told AFP.
Advertisement
Prime Minister Matteo Renzi, who came to power in February, has pledged to make inroads into corruption, seen as a significant stumbling block in attracting foreign investors to the eurozone's third largest economy.

The International Monetary Fund urged him to make good on his promises as soon as possible, advising in particular the reversal of legal reforms brought in by former premier Silvio Berlusconi which decriminalised false accounting.

Renzi -- nicknamed the "Demolition Man" for vowing to shake up the system and oust the old guard -- announced last week he was boosting the powers wielded by his top anti-corruption czar, magistrate Raffaele Cantone.

Cantone, famed for investigations against the powerful organised crime group Camorra, has called for a "real political and cultural change", describing corruption as "like the mafia. When no-one talks about it, it is prospering."

"To really achieve clean hands, we have to get hands out of pockets," he said.

The Council of Europe's anti-corruption group (GRECO) said on Friday that Italy was taking important steps, but described as "quite disappointing and hard to understand" why such slow progress had been made in casting the net wider to cover more corruption offences.

The mayor of Venice, Giorgio Orsoni, was forced to resign last week amid a sweeping probe into a multi-billion-euro flood barrier project, after police said they had traced some 20 million euros ($27 million) in kickbacks.

Two of those under investigation did time behind bars in the early 1990s for corruption, a revelation which sparked headlines in Italy warning that "Bribesville is back".

President Giorgio Napolitano waded into the fray Thursday, urging the financial police to do more -- less than two weeks after their own second in command came under investigation in a tax rigging probe.

And the justice system also came under scrutiny after a mafia boss-turned-informant accused judges in Naples of having accepted bribes to acquit him of murders he has confessed to carrying out -- sparking a police probe.

Even Pope Francis has referred to the scandals hitting the headlines, denouncing "the corrupt politician, the corrupt businessman, the corrupt priest", saying it was "the poor who pay for the parties of the corrupt. The bill goes to them."

Bruno Manfellotto, editor of the weekly L'Espresso magazine, said the difference between "Clean Hands" and today's rackets is that the latter "involve not just politicians and the odd rotten apple from the public sector, but ministers, undersecretaries, magistrates, the financial police... and secret services."

"Such a vast network of friends, and friends of friends" seems to be aimed at creating a system "to warn them of approaching trouble, mislead investigations, and shut overly-curious eyes," he said.