In a landmark case for a Catholic country, an Italian appeals court has upheld the right of a woman to adopt her wife's biological child.

Marinella Grassadonia, president of Famiglie arcobaleno (Rainbow families), which campaigns for gay adoption in Italy, said, "The decision represented the recognition of our children's right first and foremost to have the two mothers or two fathers who raised them acknowledged by the law."

The two mothers in the case were married abroad and have lived in Rome since 2003. One conceived the child by artificial insemination, also outside Italy, and in August 2014 a youth court had granted the second woman the right to adopt their daughter.


‘The decision by the Italian court represented the recognition of children's right first and foremost to have the two mothers or two fathers who raised them acknowledged by the law.’


The couple's lawyer said, "This decision was overturned but successfully appealed by the couple, with judges invoking the superior and pre-eminent interest of the child to maintain cohabitation and an affectionate relationship."

Since the initial 2014 decision, Italian courts have authorized similar adoptions or recognized those that took place in other countries.

In January 2015, a Turin court ruled that a woman married and then divorced in Spain should be considered equally the mother of her ex-partner's biological child.

While Italy is the last major western European country not to offer any legal recognition for same-sex couples, the government is working on a law that would legalize civil unions for gay couples and which would explicitly allow for a partner to adopt a child.

Prime Minister Matteo Renzi has promised a conscience vote on the bill, which is expected to be considered in parliament by the end of January 2015.

While attempts by previous administrations to change the law have been thwarted by parties with deep ties to the powerful Catholic Church, this time the majority of opposition parties have said they support the bill.

Grassadonia of Famiglie arcobaleno said Wednesday's legal decision was 'only a first step' offering a minimum of protection, calling for the institution of full gay marriage and parental rights for same-sex couples from the birth of their children onwards.

A number of EU countries including Britain, France and Spain have legalized gay marriage, but other southern and eastern European states have made slower progress.

Greece's parliament on Wednesday approved a bill granting same-sex couples the right to a civil union, overcoming years of opposition from the influential Orthodox Church. 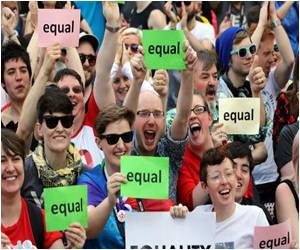 Gay Rights Demonstrators in Latin America to Seek More Rights
The US Supreme Court ruled that gay marriage is a legal right in all 50 states. US President Barack Obama praised the ruling as "a victory for America."
READ MORE

France to Repeal Ban on Gay Men Donating Blood
Blood donation will be open to gay men who have not been sexually active for the preceding 12 months.
READ MORE