Is There a Genetic Link Behind Social Phobia? 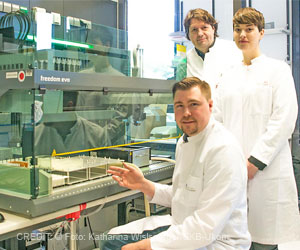 Social anxiety may prompt people to avoid situations in which they are exposed to judgement by others. These people may lead a withdrawn life and may maintain contact above all on the Internet.

One out of ten people are affected by anxiety disorder during their lifetime. A research team from the University of Bonn has recently found evidence for a gene that is found to be linked to the illness. This may encode a serotonin transporter in the brain.

Do you 'freeze' in a social awkward situation. Science now has an answer to why it happens.
Advertisement
‘Social anxiety in people may be linked to a gene which encodes serotonin in the brain.’

The messenger may suppress the feelings of anxiety and depressiveness. The research team also wanted to investigate the cause more precisely and are therefore looking for study participants.


The study results are published in the journal Psychiatric Genetics.

Heart palpitations, trembling and shortness of breath: those who suffer from social phobia avoid larger groups. Verbal tests or everyday arrangements are filled with fear - after all, other people could make a negative judgement. Those affected often avoid such situations for this reason. Contact is often easier over social media or anonymously over the Internet. Social phobias are among the psychiatric disorders that are triggered simultaneously by genetic and environmental factors. "There is still a great deal to be done in terms of researching the genetic causes of this illness," says Dr. Andreas Forstner from the Institute of Human Genetics at the University of Bonn. "Until now, only a few candidate genes have been known that could be linked to this."

In Germany, around 15 percent of adults suffer from anxiety and panic disorders.
Advertisement
Individual base pairs can vary in the DNA
Together with the Clinic and Policlinic for Psychosomatic Medicine and Psychotherapy at the University Hospital Bonn, Dr. Forstner is conducting a study into the genetic causes of social phobia. The research team investigated the DNA of a total of 321 patients and compared it with 804 control individuals. The focus of the scientists lay on what are known as single nucleotide polymorphisms (SNPs). "There are variable positions in the DNA that can exist to various degrees in different people," explains Dr. Forstner.

The cause of genetic illnesses often lies in the SNPs. It is estimated that more than thirteen million such changes exist in the human DNA. The scientists investigated a total of 24 SNPs that are suspected in the widest sense of being the cause of social phobias and other mental disorders. "This is the largest association study so far into social phobia," says associate professor (Privatdozent) Johannes Schumacher from the Institute of Human Genetics at the University of Bonn.

Patients provided information about their symptoms
Over the course of the study, scientists at the Clinic and Policlinic for Psychosomatic Medicine and Psychotherapy at the University Hospital Bonn will ask the patients about their symptoms and the severity of their social phobia. Their DNA is also examined using a blood sample. Whether there is a link between the signs of the illness and the genes is being investigated by the scientists using statistical methods. The evaluation of the previously collected data indicated that an SNP in the serotonin transporter gene SLC6A4 is involved in the development of social phobia.

This gene encodes a mechanism in the brain that is involved in transporting the important messenger serotonin. This substance suppresses, among other things, feelings of fear and depressive moods. "The result substantiates indications from previous studies that serotonin plays an important role in social phobia," says associate professor (Privatdozent) Dr. Rupert Conrad from the Clinic and Policlinic for Psychosomatic Medicine and Psychotherapy. Medications that block serotonin reuptake and increase the concentration of the messenger in the tissue fluid in the brain have already long been used to treat anxiety disorders and depression.

Subjects can participate in expanded study
The scientists now want to investigate more closely what the links are between the DNA and social phobia. "In order to achieve this goal, we need many more study participants who suffer from social anxiety," says the psychologist and study coordinator Stefanie Rambau from the Clinic and Policlinic for Psychosomatic Medicine and Psychotherapy at University Hospital Bonn. Information about the study is available at http://www.SocialPhobiaResearch.de. "Those who take part will help to research social phobia. This is the basis of better diagnosis and treatment procedures in the future," says Stefanie Rambau.

The Essence of Yoga Drug - Food Interactions Loram (2 mg) (Lorazepam) Drug Side Effects Calculator Blood - Sugar Chart Nutam (400mg) (Piracetam) Noscaphene (Noscapine) Accident and Trauma Care Indian Medical Journals Turmeric Powder - Health Benefits, Uses & Side Effects
This site uses cookies to deliver our services.By using our site, you acknowledge that you have read and understand our Cookie Policy, Privacy Policy, and our Terms of Use  Ok, Got it. Close
×

Is There a Genetic Link Behind Social Phobia? Personalised Printable Document (PDF)