Is the Shanghai Dialect a Dying Language ? 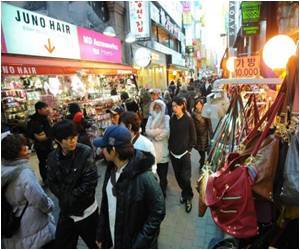 China may soon witness the fading of the Shanghai dialect, unless they work hard to promote this language.

The number of people speaking the rapid-fire language -- a badge of identity for residents of China's commercial capital of more than 20 million people -- is shrinking.

A new study has come out with a startling revelation that nearly 60 pc of primary and middle school students in Shanghai are nearsighted.
Advertisement

As the government maintains a decades-old drive to promote Mandarin Chinese as the official language, banning dialects from media broadcasts and schools, many young people are unable to fluently speak the native Shanghai tongue.


An influx of migrants from outside Shanghai and the city's drive to become more international have also combined to water down the local patois.

China is likely to hold the record of having the 'World's Highest Hotel' when The Shanghai Tower J Hotel completes in 2014.
Advertisement
"A language is like a living thing, after it gets old, it must die," said Qian, a retired professor of language studies at Shanghai University. "People born in the 1990s cannot really speak Shanghai dialect."

Shanghai is not alone. China's southern province of Guangdong has announced plans requiring broadcasters to get special permission to use the Cantonese dialect in programmes from March 1, causing a storm of controversy.

But there are signs that Shanghai's residents will not give up on their language that easily.

Shanghai comedian Zhou Libo has helped revitalise interest in the dialect with his witty routines, which often mock outsiders.

"The weakening of dialects means the weakening of local culture. Why must our children speak (Mandarin) Chinese? Shanghai people who cannot speak the Shanghai dialect. What stupidity!" he said on a talk show.

City buses have recently introduced announcements in Shanghainese, and there are plans for the metro system to follow suit to cater to older people, especially those with no formal education, who do not understand Mandarin.

Shanghai Airlines has just added an announcement about the city's attractions to market the unique features of Shanghai. But the airline had to train young flight attendants to pronounce the words.

Not long after the Communist Party took power in 1949, it made Mandarin Chinese the official language to promote unity.

The government has been unable to stamp out local dialects, but it has discouraged their use, barring them from the classroom in most cases.

Although millions of people -- mainly those aged from their 40s -- still speak the Shanghai dialect, the version Qian heard in the 1980s is now found only in the mouths of elderly people and in the city's distant suburbs.

Qian, 66, laments the disappearance of words and changes in pronunciation as Shanghainese borrows from dominant Mandarin.

"As soon as the sounds combine, a group of words change," he said.

Also lost to time are colourful curse words like "corpse floating on the river" and "ghost of an executed criminal" which were once common insults in the Shanghai dialect.

In the 1990s, the local government pulled radio and television broadcasts using the Shanghai dialect as part of a national campaign.

A popular Shanghai radio show "A Fu Gen" which featured discussions of current events was among the victims.

Xiao Ling, a host for the show, struggled for 10 years before a sympathetic official revived the programme.

Xiao is one of only two hosts at the radio station who have formal broadcast training in the Shanghai dialect.

"My colleagues joke that we are giant pandas," said Xiao.

"We thought it was good to have people from outside the organisation and even outside the school to join the class," organiser Shen Yiwen said.

Shanghai passes one-dog law, limiting homes to one canine. This measure is taken to reduce the growing popularity of canines in China's leading metropolis.
Advertisement
<< Imperative to Remove Precancerous Polyps to Reduce Colon Ca...
Trial Set to Begin for the First Vaccine Against Kala Azar >>

Stuttering
News Archive
News Resource
Advertisement
News Category
How to Reduce Needle Anxiety in Children? Tobacco Addiction: Here's How to Break the Habit Parents are 'Winging It' on Their Kids' Mobile Use Ankle and Ankle Movements While Riding an Hoverboard Is It Healthy to Let Your Mind Wander?
More News
Sign up for Wellness Consult a Doctor Sign up for Selfcare