Is a Biological Solution to Animal Pandemics Possible? 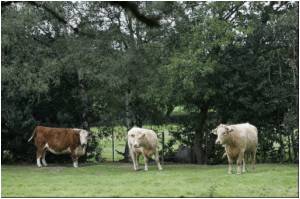 A novel and environmentally-friendly type of matting for use in protection against the spread of contagious animal diseases such as avian influenza, and for routine hygiene in animal and food production has been developed by EUREKA project E! 4104 ECOPROMAT.

Soaked with disinfectant solution, the matting can be used for disinfecting vehicle tyres, and the shoes and boots of personnel. As it is made of 100% natural fibres, it is highly absorbent to disinfectant solution; it is also fully biodegradable and therefore avoids the high disposal costs of synthetic alternatives. The under-surface is made of densely woven fabric for strength, and impregnated with natural resin to prevent seepage of disinfectant into the ground, or dilution of disinfectant by ground water.
Advertisement

Outbreaks of contagious animal diseases like avian flu, foot-and-mouth disease and bovine spongiform encephalopathy (BSE), cause national and regional public health authorities take extensive steps to prevent these diseases from spreading. The economic costs of such outbreaks are hard to estimate, but they can cause major disruption to agricultural production and food distribution, also environmental challenges in disposal of infected animals and contaminated materials; plus widespread public anxiety.


Stopping the spread of disease

Most animal diseases are spread on clothing, footwear or farm tools, equipment or the tyres of vehicles visiting farms with infected animals. When public health measures are imposed, personnel are required to pass through disinfection barriers in order to stop the transportation of bacterial or viral particles.
Advertisement
The various methods in use until now all have disadvantages. Requiring people and vehicles to pass through a shallow bath of disinfectant solution or a trough of sawdust or wood chips soaked in disinfectant is cumbersome, costly and requires labour for replacement. Another approach is a mat with an outer polyester layer, an absorbent layer made of polyurethane and a third PVC layer to prevent disinfectant from penetrating into the ground; or a nylon fibre mat backed with nitrile rubber. However the raw materials used in those mats make disposal difficult and costly, requiring special treatment plants for degradation.

Natural fibres are the solution

The new matting developed by the ECOPROMAT partners is also composed of three layers, but uses only natural materials. The lowest layer is a densely woven hemp, flax or jute fabric chosen for its toughness, resistance and flexibility, and stitched in hemp or jute fibres. This layer is finished by impregnation with natural resins, which prevent seepage of the disinfectant into the ground, and also prevent dilution of the disinfectant by absorption of ground water. The central layer of the mat is highly absorbent, non-woven material which is significantly more hygroscopic than the synthetic alternative. The upper layer is woven, needle-punched jute fabric, which is protective and durable to protect the central reservoir from pressure e.g. from vehicles driven over it. Dr Jerzy Mankowski of the Polish Institute of Natural Fibres & Medicinal Plants explains that unlike the synthetic alternatives, matting made of flax and hemp fibres is completely biodegradable and environmentally friendly.

The Institute of Natural Fibres, which led the ECOPROMAT project, was partnered by the German company, Bioformtex from Zehdenik. The main task of the Institute was to develop the three-layer non-woven product with appropriate strength, thickness and weight, to allow for proper absorption of disinfectant solution but not allowing penetration of the disinfectant into the ground. Various combinations of flax and hemp were tested to determine the mechanical and needling parameters affecting the tensile strength and recovery potential; to determine the most suitable and cost-effective textile material for the lowest layer.

Bioformtex developed the dense, non-woven central layer and the needle-punched jute upper layer. It also investigated the addition of disinfectant in powder form to the nonwoven layer during production, and developed composting accelerators to aid degradation of the natural resin in the matting.

The matting is now manufactured by Bioformtex and by another company not involved in the original project: Lenkon, from Poland. Total mat production has reached about half a million square metres per year. The Polish animal medicines company BIOWET Drwalew, which supplies disinfectants and related equipment, is supplying the matting to commercial users. Return on the project investment is anticipated within 4-5 years.

The matting is covered by Polish and European patents, and is being used in poultry, pig and cattle production units, dairies, meat processing plants and slaughterhouses, apiaries, and food processing areas. It is also used for more general antibacterial hygiene, e.g. mushroom-growing cellars and greenhouses; agricultural research centres, border crossings and quarantine areas.

The initial cost of the new matting is low - between 10-12 per square metre, which is a significant saving on synthetic matting at 15-20 per square metre. Cost saving also results from the biodegradability of the new natural-fibre matting, which means that contaminated matting can be disposed of much more readily and cheaply than the synthetic alternatives.

Participating in the international EUREKA project was felt to be very beneficial to the partners. "The Institute's participation in the project allowed us to use test equipment not previously available in our laboratories," says Jerzy Mankowski. "This resulted in improving the research potential of the Institute." As a result of the project, the new matting material has received numerous awards for innovation, including gold medals at the EUREKA Fair in Brussels and the Salon International des Inventions in Geneva.

Before Pandemic Starts, Flu Viruses Lurk in Humans and Animals for Years
Components of deadly flu viruses probably lurk in humans and other animals for years before they ......