Irregular Work Schedules May Up Injury Risk for Long-shift Miners 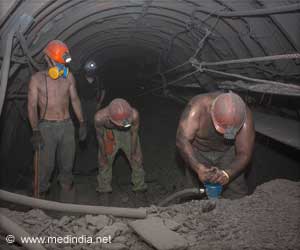 Irregular schedules and fewer breaks may increase the risk of injury for miners who work shifts longer than 9 hours, reports a new study. The findings of the study are published in the journal Occupational and Environmental Medicine.

Numerous studies have reported on the association between long work shifts and an increased risk of getting injured on the job. Fatigue, fewer breaks and psychomotor impairments resulting from long hours are believed to play a major role in the increased risk of injury for people who work shifts longer than 9 hours.

A team of researchers from the University of Illinois at Chicago examined how and why long work shifts increase the risk for injury among miners of all kinds. They found that injured miners who worked shifts longer than 9 hours tended to have irregular schedules or less than two years on the job. They also found that miners were more likely to be killed or involved in incidents affecting two or more workers when working 9 hours or more on a shift.


"While the mining industry has seen some improvements in injury rates among workers in recent decades, its workers tend to work longer hours than the average worker. Because studies on how longer shifts impact mining injuries are inconclusive, we thought it was important to take a closer look at this," said Lee Friedman, associate professor in the UIC School of Public Health and lead author on the paper.
Advertisement
Friedman said that miners often work 47 or 48 hours per week, clocking multiple 10- to 12-hour shifts, which is above the national average for workers, which is about 38 hours per week.

Friedman and his colleagues examined data from the U.S. Department of Labor's Mine Safety and Health Administration "Part 50" reports, from 1983 through 2015. These are reports that are required to be filed with the government when a miner is injured on the job. Of the 545,537 Part 50 injury reports filed, 52,206 or 9.6 percent occurred among workers who were working shifts of 9 hours or more.

The research team found that injuries occurring among long-shift miners increased three-fold in this period.

"This is somewhat in-line with there being more and more 9-hour and longer shifts among miners over this same time period, but that alone isn't enough to account for the increase in injuries we saw," Friedman said.

The factors associated with injuries occurring during longer shifts included irregular scheduling, starting shifts at different times each week, being a temporary or contract worker and being on the job for less than two years. The researchers also found that working a shift longer than 9 hours was associated with a 32 percent increased risk of an injury resulting in death and a 73 percent increased risk that an incident would cause injuries in two or more workers.

"Our findings are alarming given the shift towards hiring more contract workers and the adoption of more extended-hour workdays in the mining industry," Friedman said.

"Our study should serve policy makers and industry leaders who need to consider the effects of longer shifts on things like fatigue and nutrition, and the potential of fixed schedules to alleviate some of the risks with longer shifts."

Long Working Hours of Women Linked to Increased Risk of Cancer and Heart Disease
Women who worked 60 hours or more a week for over three decades are three times more likely to ......

Long Working Hours May Up Depression Risk in Women
Are you working overtime? Watch out, Too much working hours may put women at a higher risk for ......

Should Low Wages be Considered an Occupational Health Hazard?
Higher wages lead to improvements in health or health behaviors, and it has also been shown to ......

Many People Turned Into Couch Potatoes Thanks To Long Working Hours
A survey has found that half the population find it hard to motivate themselves to leave the house ....