Irish Catholic Leader Steps Down and Apologises for Child Abuse

by Himabindu Venkatakrishnan on  September 9, 2014 at 8:57 PM Lifestyle News

Cardinal Sean Brady was criticized over his handling of abuse scandals. He stepped down as leader of the Irish Catholic Church on Monday with an emotional plea for forgiveness.

"I too need to say sorry and to ask forgiveness and I do so again today," Brady told the faithful at a mass in Armagh in Northern Ireland.

Brady, who played a key role in the peace process after being appointed in 1996, had tendered his resignation to the Vatican last month after turning 75, the normal retirement age for senior clergy.


His years as leader of the Irish church coincided with a series of damning revelations of widespread clerical sex abuse.

Brady himself became directly embroiled in accusations that he mishandled child abuse allegations during an investigation into notorious paedophile Father Brendan Smyth.

In 1975, as a young priest and canon lawyer investigating the actions of Smyth, Brady did not report the allegations of abuse to the police. Smyth continued to abuse children until his arrest and conviction in the 1990s.

A television documentary in 2012 revealed Brady did not act when given the names of five other children abused by Smyth.

Brady subsequently issued a public apology to the victims but refused to step down.

Survivors of clerical sex abuse -- including one of Pope Francis's own advisors on the issue, Marie Kane -- have repeatedly criticized Brady for not stepping aside sooner.

"I am pleased that Pope Francis has today accepted the resignation which I offered to him on the occasion of my 75th birthday," Brady said in a statement.

Brady has been succeeded by Eamon Martin, 52, as the Archbishop of Armagh and as Catholic Primate of Ireland.

During the mass, Brady became emotional and issued the new apology: "I too need to say sorry and to ask forgiveness and I do so again today."

Brady is credited with playing a key role behind the scenes in the Northern Ireland peace process.

In 2010, Brady asked Pope Benedict XVI to appoint someone to assist him in his role and in 2013, Eamon Martin was appointed.

Martin, a comfortable media performer unlike his predecessor, was born on October 30, 1961 in Derry/Londonderry in Northern Ireland.

He was ordained a priest in 1987 and later worked as a teacher in Saint Columb's college in Derry/Londonderry, a school that boasts Nobel prize winners Seamus Heaney and John Hume as past pupils.

Martin told Irish national radio RTE on Monday that he would not be drawing a line under the past failures of the Church in Ireland.

"I don't think that would be right for the survivors of abuse at the hands of the Church.

"I think that this is something we carry with us."

Martin also said criticism of the church's handling of the clerical sex scandals was largely justified.

"We made a mess of things. Many people have been deeply traumatized and hurt by the acts of some priests and also then by the way that the church followed it up, or didn't follow it up as it should have." 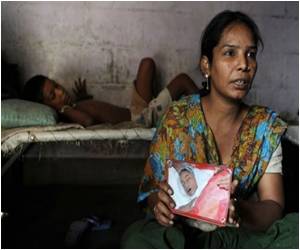 David Beckham Launches Crusade Against Child Abuse
Against the issue of violence against children, footie ace David Beckham has spoken out.
READ MORE