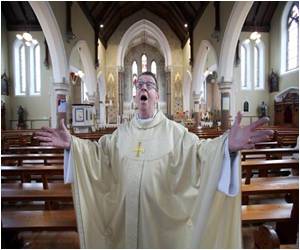 From an improvised studio in his house in remote Ireland, Father Ray Kelly has become a global singing sensation and new fans now mingle with long-time parishioners in his flock.

The 62-year-old clergyman's unexpected music career kicked off a year ago and now includes a platinum-selling album, 42 million YouTube hits and chat show appearances all across the world.


Twelve months ago, Kelly sang a version of Leonard Cohen's "Hallelujah' during a wedding ceremony of an unsuspecting couple in his small parish of Oldcastle, 100 kilometers (62 miles) northwest of Dublin. A video of the performance quickly became a viral hit.


"From there it just escalated. The video has almost 42 million hits and is going up about 35,000 every day," Father Kelly told AFP in an interview in the parish house he shares with his two King Charles Spaniel dogs -- Biddy and Buddy. He soon found himself appearing on chat shows before Universal Music offered him a record deal.

"It's been mad," Kelly said. "I never thought this would happen at this stage of my life. I was thinking of nearly retiring and now all of a sudden I've a music career." The album was recently released in the United States and this week will get its Australian launch. There's now talk of a follow-up Christmas album.

Featuring Celtic, religious and pop songs, it was recorded over a two-month period in a specially built studio in his home so as not interfere with his parish duties.

Oldcastle is a quiet rural town close to one of Ireland's most mythical sites, the Boyne Valley, home to Neolithic passage tombs, monastic ruins and the seat of the old Irish High Kings.

Outside St Brigid's Church, Eileen O'Reilly said the whole town was delighted by Kelly's success. "We all knew Father Kelly could sing from masses over the years. When he sings, it just lifts the whole place," she told AFP.

Kelly still sings at masses, and on a recent visit by AFP his rendition of "Amazing Grace" received a hearty applause.

Afterwards as Kelly walked from the church, a well-dressed woman stopped him at the door. "I've come all the way from England to see you."

"I heard Father Kelly and thought he was excellent," Margaret Raw from Epsom in England said after posing for some photographs with Kelly. "I'm over on holidays in Ireland and wanted to come see him. He has a wonderful voice."

Last summer, American tourists would occasionally appear at masses to see him, Kelly said. "They might fly into Dublin airport on Sunday morning and their first port of call was to Oldcastle for 11:30 mass then go off on their holidays but they wanted to meet me and hear me sing."

In the 1970s before becoming a priest, Kelly had voice training and often took part in talent competitions in Dublin pubs. He later appeared in local productions of musicals such as "Jesus Christ Superstar" and "Guys and Dolls".

Since the YouTube video went viral, he's been to Britain, Germany and the US promoting the album, even taking part in the New York St Patrick's Day parade last month.

In recent years, the Catholic Church in Ireland has been badly damaged by revelations about abuse and exploitation stretching back decades.

Despite strong sales and the occasional concert, Kelly has yet to receive any significant royalties. "I'm still a normal parish priest in a small country town in Ireland and I'm quite happy doing that."

He hopes to help a number of charities, as well as his 15 nieces and nephews, many of whom have fallen foul of Ireland's economic crash.

"Some of them have big mortgages after buying houses in boom times and are now in negative equity. Please God I'll be able to help them somewhere along the road. As for myself, there'll be no Lamborghini outside the church or a yacht."

Ireland Pushes Anti-Smoking Drive With Plain Packaging for Cigarettes
Ireland is pushing ahead to be the first EU state with plain packaging for cigarettes despite fierce opposition from tobacco companies, ten years since setting a trend with its workplace smoking ban.
READ MORE

Suspected Ebola Case Tested in Ireland
A "suspected case of Ebola virus" is being tested by Irish authorities after a person who traveled to an affected area in Africa was found dead.
READ MORE