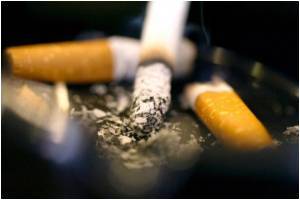 Iraq parliament bans smoking in public. "The law aims to protect citizens from the danger of tobacco and reduce the number of smokers by taking measures to combat this plague," the law reads.

The law is to take effect 90 days after it is published in the official gazette.


One of its sponsors, health committee member Haidar al-Shamari, said in his remarks the law is based on Article 33 of the constitution, which says that "every individual has the right to live in safe environmental conditions."

Approximately half the smokers die due to smoking -related diseases. But it is not just the smokers who are at the receiving end. The passive smokers too, often pay a heavy price. If you still have not 'kicked the butt', learn more horrifying facts about smoking by participating in the following quiz.
Advertisement
But one MP thought the law was not a priority, saying "it would be better to provide improved public services instead of punishing smokers."

According to study carried out in 2000 by the Union for International Cancer Cancer Control, a Geneva-based non-governmental organisation founded in 2000, 40 percent of Iraqi males over age 16 were smokers.

Do you smoke cigarettes daily? Use medindia smoking risk calculator and calculate your reduced Life Span due to Smoking.
Advertisement
<< Past Decade Sees Surge in STIs in Older Adults
Germans Looking to Switch From Private to National Health I... >>