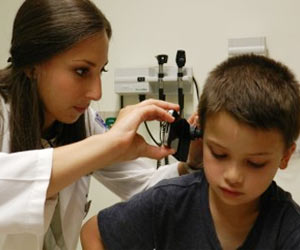 New iPhone attachment developed by researchers for at-home diagnosis of ear infections. Soon, parents may be able to skip the doctor's visit and receive a diagnosis without leaving home by using Remotoscope, a clip-on attachment and software app that turns an iPhone into an otoscope.

Pediatricians currently diagnose ear infections using the standard otoscope to examine the eardrum. With Remotoscope, parents would be able to take a picture or video of their child's eardrum using the iPhone and send the images digitally to a physician for diagnostic review.

Wilbur Lam, assistant professor in the Wallace H. Coulter Department of Biomedical Engineering at Georgia Tech and Emory University, along with his colleagues at the University of California, Berkeley, is developing the device, with plans to commercialize it.


"Ultimately we think parents could receive a diagnosis at home and forgo the late-night trips to the emergency room," said Lam, who is also a physician at Children's Healthcare of Atlanta and an assistant professor of pediatrics at Emory School of Medicine. "It's known that kids who get ear infections early in life are at risk for recurrent ear infections. It can be a very big deal and really affect their families' quality of life."

A little difficulty in hearing is natural with the aging process but if the auditory damage occurs because of other reasons, it can be a cause for concern. Take this quiz to find out how much you know about hearing loss.
Advertisement
Remotoscope's clip-on attachment uses the iPhone's camera and flash as the light source as well as a custom software app to provide magnification and record data to the phone. The iPhone's data transmission capabilities seamlessly send images and video to a doctor's inbox or to the patient's electronic medical record.

The device has the potential to save money for both families and healthcare systems, Lam says. Ear infections, or otitis media, affect 75 percent of children by age 6, making it the most common diagnosis for preschoolers. They result in more than 15 million office visits per year in the United States and thousands of prescriptions for antibiotics, which are sometimes not needed.

At the initial visit with a patient, physicians say it is difficult to differentiate between ear infections caused by viruses, which resolve on their own, and those caused by bacteria, which would require antibiotics.

Lam says Remotoscope may be able to change physicians' prescription patterns of antibiotics for ear infections. Receiving serial images of a child's ear over several days via the Remotoscope could allow physicians to wait and see if a child's infection improves or whether antibiotics are warranted.

A clinical trial for the Remotoscope is currently under way to see if the device can obtain images of the same diagnostic quality as what a physician sees with a traditional otoscope. The Food and Drug Administration, through the Atlanta Pediatric Device Consortium, is partially funding the trial.

Fourth-year Emory medical student Kathryn Rappaport, who is part of the research team, is recruiting families who come into the emergency department at Children's Healthcare of Atlanta hospitals for treatment of ear infection-type symptoms. Once a family agrees to be in the trial and the child has seen the emergency room doctor, Rappaport takes video of the child's ear with Remotoscope and a traditional otoscope linked to a computer. Next, a panel of physicians will review the quality of the samples, make a diagnosis from the Remotoscope video and see if it matches the original diagnosis by the ER doctor.

As part of the clinical trial, Rappaport is also conducting a survey asking parents their opinions on using the device.

"A lot of parents said they would want to use it, which surprised me because I think it could be scary to look in someone's ear and because I think parents would be afraid they could hurt their child," Rappaport said. "Parents are enthusiastic and ask me where they can get it, but we're not there yet."

The research team hopes to publish the trial's results by the end of the year and then study whether the Remotoscope enables physicians to implement the "watchful waiting" plan rather than prescribing antibiotics right away.

Remotoscope has had a long journey with many players to get to where it is today. Lam and a colleague, Erik Douglas, started the project while doctoral students at UC, Berkeley. The two researchers went on to create the startup CellScope Inc., which aims to commercialize Remotoscope once clinical studies are complete and the device has FDA approval.

In 2011, when Lam joined the faculty at Georgia Tech and Emory, he brought the project with him to Atlanta. Today resources from both institutions, as well as Children's Healthcare of Atlanta and the Atlanta Clinical & Translational Science Institute, are being used to take the medical device to the next level.

The Remotoscope is one of nine medical device projects supported by the Atlanta Pediatric Device Consortium, which is a partnership among Georgia Tech, Children's Healthcare of Atlanta and Emory University. The consortium, one of four in the U.S., provides assistance with engineering design, prototype development, pre-clinical and clinical studies and commercialization for pediatric medical devices.

"The whole goal is to create, develop and commercialize pediatric medical devices specifically for kids," Lam said. "Kids are not just small adults. Physiologically they are different. So to only have medical devices scaled down from adult ones creates this void where there are many diseases that affect only the pediatric population but there are not any available devices to treat them."

Ear converts sound waves into electrical impulses that are transmitted to the temporal lobe of the brain through the auditory nerve. It consists of outer, inner and middle sections.
Advertisement
<< Cameras can be a New Generation Security System
Intuition Influences Our Moral Judgments >>

Drug Interaction Checker Iron Intake Calculator Vent Forte (Theophylline) The Essence of Yoga Daily Calorie Requirements Drug Side Effects Calculator Turmeric Powder - Health Benefits, Uses & Side Effects How to Reduce School Bag Weight - Simple Tips Blood - Sugar Chart Find a Doctor
This site uses cookies to deliver our services. By using our site, you acknowledge that you have read and understand our Cookie Policy, Privacy Policy, and our Terms of Use