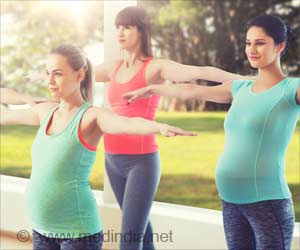 Intestinal bacteria were found to sense pregnancy and understand the need to move to the next generation in order to assist babies in breaking down the sugar in mother's milk, said Bar-Ilan University researchers.

Gestation is accompanied by alterations in the microbiome - bacteria that live inside and on our body and weigh over four pounds of our body weight and are important in health and in fighting disease. Previous research that focused on changes in the microbiome showed that during pregnancy it is partially responsible for weight gain and for essential inflammatory response. However, the mechanisms driving these changes are unknown.

A new study, conducted by Dr. Omry Koren, of the Azrieli Faculty of Medicine together with Prof. Yoram Louzon, of the Department of Mathematics at Bar-Ilan University, and researchers from Beilinson Hospital, has found that progesterone regulates the microbial composition of bacteria during pregnancy in a way that may help the baby develop. The study was published today (April 16, 2019) in Cell Reports.

The findings provide new insights into understanding the relationship not only between hormones and intestinal bacteria during pregnancy, but also for other conditions in which hormones are involved, such as progesterone supplementation as a component of fertility treatments or therapy in menopausal women," said Dr. Koren.

Koren and team are now attempting to identify how these bacteria react, what genes are turned on, what other pregnancy hormones do and what effect they have.

Source: Eurekalert
Advertisement
<< Soft Bedding: A Primary Cause of Infant Suffocation During S...
Cause of Rare Genetic Metabolic Disorder Discovered >>

Best Sleep Positions During Pregnancy
Being pregnant can rob a woman off her peaceful shut eye. Try these positions to ensure you get ......

Quiz on Multiple Pregnancy
Twins? Triplets? So, you now know you are having a multiple pregnancy. How do you prepare for a ......

Exercise during Pregnancy
Looking for exercises during pregnancy? Use this slideshow as guide to 10 easy and uncomplicated ......