by Medindia Content Team on  February 14, 2008 at 4:31 PM Medindia Exclusive - Interviews and In depth Reports

One of the world's leading herpetologists, Dr. Ian Simpson, is campaigning for greater awareness of the right way to tackle snakebites.

'Snakebites, Do it Right Campaign' 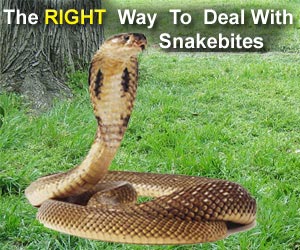 As many as 10,000 people in India die every year of snakebites. That is more people than the tsunami could ever wipe out. Yet there is not enough research in this field.

For doctors therefore, the Do it Right campaign, which has been implemented in Rajasthan, West Bengal, Madhya Pradesh and Andhra Pradesh and soon to be launched in Tamil Nadu, is significant.

One of the world's leading herpetologists, Dr. Ian Simpson, who is also on the Tamil Nadu Snake-bite Task Force Council and snake advisor to the Pakistan Medical Research, was also instrumental in designing the national protocol, which is a step-by-step guide approved by the Government of India to treating snakebites.

Dr. Ian Simpson has been working from Kerala and has been associated with the Little Flower Hospital, SRM Hospital and Bombay Natural History Society in his research. His research papers have been published in the Transactions of the Royal Society of Tropical Medicine, Wilderness and Environmental Medicine and Journal of the Indian Medical Association.

Medindia caught up with Dr. Ian Simpson recently. Here are some excerpts from the interview:

What is the objective of the 'Do it RIGHT' campaign?

The Do it R.I.G.H.T. campaign is based on giving the best first aid advice to victims so that they can get to hospital in the best possible shape. Traditional methods such as tying a tight tourniquet and cutting and sucking the wound have been shown to be ineffective and dangerous. Tourniquets carry the risk of increasing local tissue damage either on their own or by increasing the necrotic damage caused by the snake venom. Viper bites lowers the blood clotting potential. Cutting the victim creates a further risk of severe bleeding, as the victim's blood is no longer able to clot. In addition, suction, either by mouth or using the so -called 'venom extraction devices' has been shown to be ineffective.

The Do it Right method stresses the need to -

R- Reassure the patient. 70% of snakebites come from non-venomous species. Of the remaining 30%, which are from venomous species, half will not inject venom and are called 'dry bites'. The victim is not at risk. . This is why traditional treatments appear to work. What this does, however, is to delay the victims who have been envenomed from reaching the hospital.

I- Immobilise the affected limb in the same way as a fracture. Do not tie tight bandages; simply stop the limb from moving as movement helps venom spread.

GH - Get to hospital fast. If there is nothing wrong with you then you will be discharged after observation. If you have been envenomed, then the doctor will administer anti- venom. A groundbreaking study just carried out in West Bengal shows that victims who do not survive are those that come late to the hospital. Getting to hospital quickly will save the victim's life!

T - Tell the doctor of any signs that develop on the way to the hospital such as, drooping eyelids, double vision, tasting blood in the mouth or unusual bruising, as these all help the doctor to diagnose if the victim needs anti venom.

Can u tell us of the ill effects of tying a bandage, cutting the bite area with a knife or tying a tourniquet?

Another method of first aid that has been recommended is the Pressure Immobilisation Method (PIM), developed in Australia. This involves tying a bandage in the same way as for a sprain. The idea is that the bandage and splint slow the venom moving through the lymphatic system. However, there are major problems with this approach.

The experimental basis on which it was based was not convincing. Further research showed that it had to be tied in a narrow range of pressure depending on whether the limb was an upper or lower one. In addition, even if tied correctly, if the victim walked for more than 10 minutes the bandage would not work. Prof Bob Norris carried out a great study showing that in a simulated snakebite only 13% of emergency trained doctors could tie it correctly. This technique needs more research before being put to use.

What about identification of the dead snake, which has bitten the patient?

Most people bring a dead snake to the hospital and the doctor's definitely not a herpetologist.

In actual fact only a small number of patients bring the dead snake. It is useful if the doctor can see the snake but generally the snake escapes. The important point is that the doctor will use the right symptoms to administer ASV (Anti-Snake Venom).

A great deal of ASV is wasted because doctors use criteria from Western textbooks that are not suitable for Indian conditions.

In India the criteria for giving ASV are -

3. Severe current swelling i.e. swelling that crosses a joint or involves half the bitten limb. Simply local swelling at or around the bite site is not grounds for ASV administration.

What are the do's and don't for doctors if he cannot identify the snake?

Most people react strongly to the anti-venom. So can administration of ASV be avoided?

The only defence to venom is ASV. But doctors must know when one needs to administer ASV. On an average 70% of bites are from non-venomous species, such as rat snakes and keelbacks. Of the remaining 30%, which are from venomous species only around 50% inject venom into the victim. The remainder are called dry bites, where the snake bites but does not envenomate the victim. In these cases no ASV is required.

Most often general physicians take care of snake bites, how can these doctors equip themselves to deal with a snake bite more efficiently?

Doctors can best equip themselves by using the new protocol to treat snakebite. There are a number of states such as West Bengal and Rajasthan that have adopted it. The Government has approved of the national protocol, which will be launched soon.

Basic drugs such as anti-venom are the key, but equipments like resuscitation bags and rubber endotracheal tubes (size 5) also help. These can be cut to size and inserted into the victim's nasal passages before transfer in cases of neurotoxic bites. Drugs such as neostigmine and atropine to help in neurotoxic bites and drugs such as adrenaline handle adverse reactions to ASV (anti-snake venom).

Comments should be on the topic and should not be abusive. The editorial team reserves the right to review and moderate the comments posted on the site.
IDSIndia

The article does NOT say it needs a herpetologist to identify the snake! It says that the doctor uses the right symptoms to administer ASV. In point of fact most snakes identified by doctors are identified incorrectly! Also there are a great deal more than 4 snakes of medical significance in Insdia. A great deal of ASV is wasted because it is given when not required because western criteria are used. IDS

The article DOES say "Most people bring a dead snake to the hospital and the doctor's definitely not a herpetologist." Your point that they are mostly incorrectly identified just supports what I said! ASV in India is only useful for the bites of Cobra, Common Krait, Russell's Viper, and Saw-scaled Viper. My comment, which you seem to have misunderstood, is that if a doctor considers him/herself to be a professional, then why should they not teach themselves to identify these four species of snake? That is not difficult, and it is critical that ASV not be wasted on envenomation caused by another type of snake other than the Big Four. Using Indian ASV for a Banded Krait or a Pit Viper for example, is useless and actually puts the patient at unnecessary risk of complications or death from the serum. Administering ASV based on symptoms alone may be the right thing to do if you have no information about the type of snake, but otherwise an identification is ideal. No?

Why does it take a herpetologist to identify whether the snake is one of the four that the antivenom works for? How long does it really take to be able to recognize four species of snake? Give me a break. These people bringing the snake to the hospital seem to be better educated than the doctor. I hope that guy's not giving me antivenom for some snake-venom it is useless on.

Snake bite from a venomous snakes like King Cobra, Russell viper can be deadly. A quick and simple First Aid guide on Snake bite treatment and management.