by Thilaka Ravi on  October 19, 2010 at 7:18 PM Medindia Exclusive - Interviews and In depth Reports 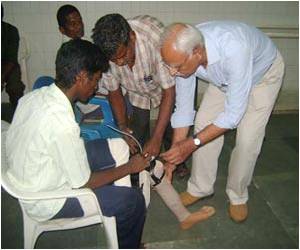 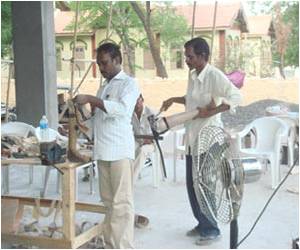 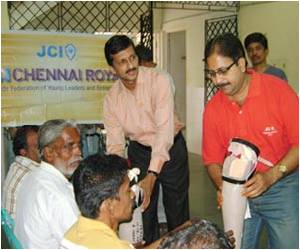 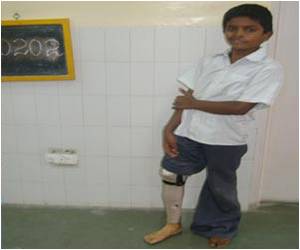 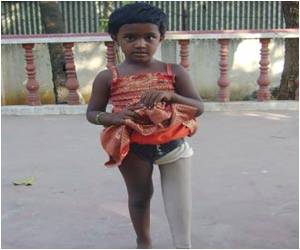 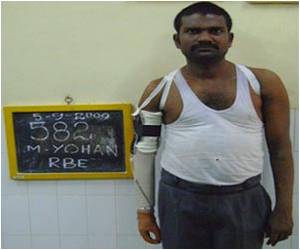 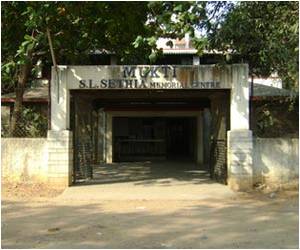 Muktis humble beginning
She has beaten breast cancer, overcome dyslexia, retains her 'joie de vivre' and never loses an opportunity to serve the society. Meet Meena Dadha, Founder and Director, Mukti India, an NGO that employs skilled craftsmen as well as physically and mentally challenged workers to give amputees and polio victims, free prostheses and freedom from crutches. Mukti has organized several camps in India and abroad to give away artificial limbs and calipers free of cost to people who would otherwise have remained crippled for life. Over a thousand artificial limbs were recently shipped free of cost to Sri Lanka and fitted at a foot camp organized in the country.

Medindia heard Meena Dhadha recount the early days of Mukti and how the lakhs of internationally certified upper limbs, lower limbs and braces supplied by Mukti have offered dignity of life to people living in India, Bangladesh, Sri Lanka and Latin American countries.

Q. How did Mukti happen? Tell us your story of how you decided on an artificial limb center to supply prostheses free of cost to needy people?

When I was 17 years old I was married into a conservative Marwari family in Chennai and moved into a joint family. I had a loving husband, two children and a very supportive extended family, but I was still searching for something useful to do that would help needy people. My husband and I were invited to the Artificial Limb Camp in Chennai organized by the Rajasthan Youth Association in 1984. We observed that there were about 500 people who needed prostheses and only 100 aids were available, which meant400 went home disappointed. I knew then, what I had to do!

My husband and I pooled in our resources and started an artificial limb center in a garage at Lloyd's Road in Chennai to distribute free artificial limbs and calipers to people who needed them. People started trickling in and as word spread, they came in hundreds and then thousands. We brought in 'Jaipur foot' experts from Rajasthan to train technicians here in Tamilnadu. The prostheses we supply are made using High Density Polyethylene HDPE. All beneficiaries are welcomed back any number of times, should they need their aids replaced or repaired. We now operate from our 16,000sq ft facility at Meenambakkam, Chennai, South India that we built from the money my mother set aside for me.

Q. Your beneficiaries say that you provide career guidance too. How do you manage that?

Mukti means liberation. If we give people free artificial limbs but they are still struggling for a living, our plans for rehabilitation are only partially complete. Following our first camp at Sowcarpet we regularly organize camps to reach out to people needing artificial limbs and polio calipers. I've met people who gained mobility with our aids but were still at a loss to earn a livelihood because employers were not too keen on hiring physically challenged people.  I wanted to go all out and see that people who approached us for help were fully served.

I arranged for some people who were fitted with prostheses to work at our Mukti workshop. I encouraged some others to set up small scale industries or service centres such as telephone booths, data processing centres and canteens or even marketing consumer goods. Even today our organization arranges for soft loans and simple means of financial support or acts as a liaison for facilitating help from various government and private agencies on a regular basis to provide a means of livelihood to people who wear our artificial limbs.

I believe in what Benjamin Disraeli said, "The greatest good you can do for another is not just to share your riches but to reveal to him his own."

Q. You have some mentally challenged people among your staff. How has that been possible?

In 2000 Dr. Sarada Menon, who spearheaded the awareness on Schizophrenia through the Schizophrenia Research Foundation (SCARF) in Chennai, spoke to me at length about how important it was for these mentally challenged sufferers to be gainfully employed to speed up their rehabilitation process and requested me to give it a try. I thought 'Why not?' Mentally challenged people are now trained in screen printing and we employ them to make leather belts and rubber feet for the artificial limbs and braces.

Now I have mentally challenged people working as my staff members while they are still on the road to recovery and we've noticed that working in a group is brightening them up gradually.  Their families are so relieved that they can work and earn money and not sit at home brooding in isolation, which would have been the case had they remained unemployed.

Q. Can you recall for our readers the proudest or most poignant moment in your life?

When my husband and I were at a foot camp recently, a woman handed us some fruits and stood with tears streaming down her face. She told us that a few years ago her husband lost both legs in a road accident and consequently his job. He lay crippled at home, their 3 children dropped out of school and the woman had exhausted all possibilities of hunting for a job whereby she could support her family.  She had noticed men in her neighborhood whistling as she walked by each time and had almost decided on resorting to prostitution as a means of livelihood, when someone told her of Mukti. She said her husband became one of those fitted with a pair of lower limbs free of charges at Mukti, found employment and began to support his family.

One man was fitted with artificial legs but an entire family now walks proudly thanks to the support. That's how it works. If you help a person, a family is sustained and if families are strengthened a nation takes giant strides forward. I cannot forget the happiness reflected in the woman's eyes that day.

Q. How does Mukti sustain itself as a non profit organization all these years?

A.  Though the initial investment was made by pooling resources from our family, a major portion of Mukti's funding these days comes from voluntary contributions. Many well-wishers and philanthropists 'sponsor limbs' by contributing Rs. 2000/- for each Mukti Limb. For larger sponsorships of at least 100 limbs, Mukti conducts an 'Artificial Limb Camp' wherein Mukti, with men and materials, goes to remote areas and makes about 100 limbs on the spot in 10 to 12 days. Such sponsorships help Mukti to reach out to a greater number of beneficiaries.

Mukti has also organized a series of week-long art workshops that brought together leading artists from different states in India to interact with talented, yet physically challenged artists in Tamil Nadu. The paintings that materialized as a result of these art workshops were used to generate income for Mukti. We constantly explore ways to help sustain physically and mentally challenged people while still funding Mukti's projects.

Q. How can Medindia help Mukti in furthering the cause of rehabilitating lives of amputees and polio affected victims?

A. You can spread the message that people who have lost limbs or have lost their mobility for certain other reasons need not feel useless and succumb to depression. Mukti is ready to supply free artificial limbs and braces to the needy and help rehabilitate their lives in whatever ways we can. When Mukti had its humble beginnings in a garage a couple of decades ago, a Tamil magazine affiliated to the popular Tamil newspaper Dina Thanthi sent a reporter named Milton to interview us. The Interview reported that Mukti was there to enable freedom from crutches. The following month we had over 700 people seeking Mukti to have limbs and calipers fitted. With that kind of response we were encouraged to move forward and there's been no turning back since then.

"Teach this triple truth to all: A generous heart, kind speech and a life of service and compassion are the things that renew humanity."  - Buddha

Truck drivers, electricians, carpenters, students, housewivesthese and a lot many people owe their normal life and their extremely comfortable artificial limbs to Mukti.

Medindia is committed to spreading the message about the good work done by organizations such as Mukti that serve the society and help build a nation. Medindia's social networking site invites support groups for artificial limbs to benefit from Mukti's gift of prostheses to those who need free artificial limbs and calipers.