Electronic cigarettes, or smokeless cigarettes that promise to recreate a smoking experience for those who are huffing and puffing for that 'drag' have been in the news for quite a while trying to establish their credibility. The latest is a US Court of Appeals ruling that FDA cannot ban e-cigarettes.

Telephone landlines have been replaced by mobiles and public phone booths are fading into obscurity, gramophone players, transistors, tape recorders and even compact discs have been compressed into all in one light weight portable mp3 players, but what of traditionally 'injurious to health' cigarettes? Well, cigarettes have also gotten a technological makeover and let's see how. 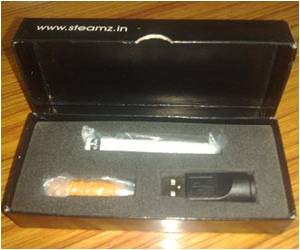 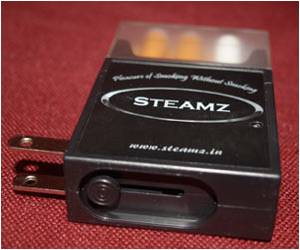 USB charger at the bottom 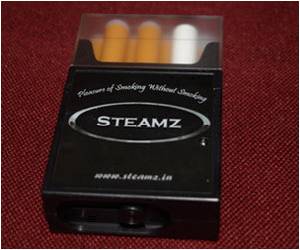 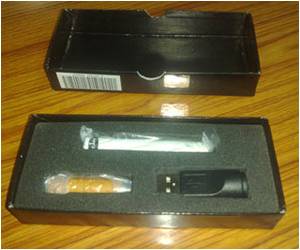 Mr. Sunil Kumar of Steamz, the E-Cigarette Company in India, explains to Medindia, his reasons for promoting e-cigarettes as opposed to conventional cigarettes with tobacco.


Q.  What are the components of an e-cigarette?

Response:  A non-nicotine cartridge contains water, food safe flavouring agents, and glycol, again a food safe agent. The glycol is added to emit steam instead of smoke. Since there is no smoke emission, it's pollution free thus preventing secondary smoking or passive smoking.

Q. If there is no nicotine, how do you appeal to smokers who are addicted to nicotine? What of chain smokers?

Response: We introduced the product in the market to discourage people from smoking. We sell nicotine cartridges only on insistence. There are four kinds of cartridges: high nicotine, medium nicotine, low nicotine and non-nicotine. These cartridges are to encourage smokers to gradually reduce and eventually quit smoking.

Q. Sounds too good to be true, so why has the WHO not approved the product as nicotine replacement therapy?

Response: Initially when the product was introduced in the US, the FDA did not approve it. But, later seeing the impact it has come to be accepted and become widely popular in the US and other Western countries. It's a new product and it will take time to see itsutility. If the government cannot ban cigarettes, which are hazardous to health, they cannot ban e-cigarettes for obvious reasons.

1. No nicotine, no smoke, but gives the satisfaction of smoking. So it is a safe option as opposed to smoking cigarettes with tobacco.

2. It can be used on board because according to law only lit tobacco is smoking. Since there is no tobacco lit and no smoke emission, it is not unlawful.

3. You can try placing a handkerchief and smoke a tobacco cigarette and you will find that it leaves a stain. But, even with a cartridge with nicotine fluid, there's no stain.

Q. In your opinion, how are e-cigarettes more effective than patches and chewing gums?

Response: When a smoker smokes a cigarette, the nicotine takes 6 to 8 seconds to reach the brain and release dopamine; this makes nicotine an addictive drug. So psychologically a smoker needs the same sensation of using a cigarette, a desire to quench oral fixation. Patches don't give that satisfaction and chewing gums will be effective on tobacco chewers, not smokers. One week of using an e-cigarette can make a lot of difference. If a smoker returns to regular cigarettes, the nicotine impact from a regular cigarette is unpleasant.

Q. Who is the target buyer for e-cigarettes?

Response: People from all strata of the society. Initially it was highly priced, we were selling it for Rs. 4000/- with 15 cartridges but a taxi-driver was willing to buy and use the product.  Now the price is slashed to make it affordable. We do not want e-cigarettes to be a fashion statement, people are getting health conscious and we want to promote good health, but one cannot expect smokers to quit smoking through lip service. If that is possible, then the consumption and the revenue from the tobacco industry should have decreased. It's only been on the rise in spite of the mandatory health hazard warning on the cigarette packs.

Q. How much do e-cigarettes cost now?

Response: It'sbetter priced than before. The first kit contains a battery, a charger and a cartridge and priced at Rs. 700/-. After that a person needs to buy only the cartridge (refills) each priced at Rs. 100/-. Each cartridge is equal to 30 cigarettes. So for someone who smokes 10 cigarettes a day, it should last for three days.

Q. How do you dispose the cartridges?

Response: Not anywhere near combustible material. You dispose like other electrical items and batteries.

Q. How is the reception for the product in India?

Response: We've made many families smile. Homemakers are grateful and promote the product seeing family members who've quit smoking. Even doctors who have quit recommend e-cigarettes. It's the social cause that appeals the most with e-cigarettes. Also, e-cigarette (nicotine) consumers are not posing a threat to another human being.

Rechargeable e-cigarettes are drawing favourable attention because the claims are reasonable and practical. The product is a novel invention and the intention behind promoting e-cigarettes is undeniably noble. The market for e-cigarettes is by and large massive given the percentage of smokers.  Since e-cigarettes are new in the Indian scenario, the demand is gradually growing. However good health is a personal choice and for smokers, e-cigarettes pose a healthy option to oneself and companions.

More News on:
Smoking And Cancer Smoking And Tobacco Amoebic Dysentery Diet Lifestyle and Heart Disease Cigarette Smoking - A Silent Killer Antioxidants to Help You When You Quit Smoking