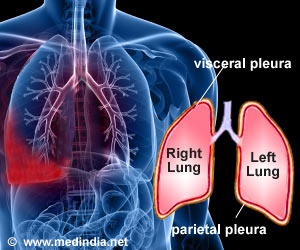 According to research, the lot-busting drug tenecteplase prevents death or circulatory collapse in a subgroup of patients with a blood clot in the lungs and appears to be especially useful in patients younger than 75. The research as presented at the American College of Cardiology's 62nd Annual Scientific Session.

Pulmonary embolism occurs when part of a blood clot in a vein breaks off and travels to the lungs. It is fatal about 10 percent of the time, killing between 60,000 and 100,000 Americans each year. The most common cause of death is progressive failure of the heart's right ventricle, which sends blood to the lungs to pick up oxygen. Right ventricle failure leads to hemodynamic collapse, which means blood no longer circulates properly. Blood pressure suddenly drops or disappears altogether, and the risk of death is high.

Heparin is the current standard therapy for most patients, including a subgroup of patients that is said to have submassive or intermediate-risk pulmonary embolism: that is, they have normal blood pressure but dysfunction of the heart's right ventricle, which can be seen on an echocardiogram or CT scan. Blood tests also can help to identify these patients.


The Pulmonary Embolism Thrombolysis Study (PEITHO) tested the addition of a clot-busting (thrombolytic) drug, tenecteplase, to standard treatment with heparin. Tenecteplase dissolves blood clots rapidly but carries a known risk of bleeding in the brain. The double-blind study included 1,006 patients in 13 countries. They were randomized to heparin plus placebo or heparin plus tenecteplase.
Advertisement
The combined primary endpoint was death from any cause or circulatory system (hemodynamic) collapse after seven days. Hemodynamic collapse was defined as at least one of the following: needing CPR due to a loss of blood pressure; systolic blood pressure of less than 90 mm Hg or a drop of more than 40 mm Hg for at least 15 minutes; or the need for drugs called catecholamines, which boost circulation.

The primary endpoint was reduced by 56 percent in patients treated with tenecteplase and heparin, compared with the heparin-only group.

"In patients with intermediate-risk pulmonary embolism, thrombolytic treatment significantly reduced the primary endpoint," said Stavros Konstantinides, MD, PhD, professor for clinical trials at the Center for Thrombosis and Hemostasis, University of Mainz, Germany, and the study's co-principal investigator. "Overall, the study strongly supports the concept that risk stratification of patients makes sense and that these patients need something to prevent deterioration."

"This is more or less the rate that we have seen in previous thrombolytic trials," Dr. Konstantinides said."Patients who were less than 75 years old had most of the benefit and a tendency toward fewer hemorrhagic strokes. Our future priorities are now to refine our risk stratification concept even further, to better identify those patients who will benefit most with less risk of bleeding. Also, the dose of the drug that we used could be lowered in older patients, and alternative methods of delivering thrombolytics could be explored."

Pulmonary Embolism
Pulmonary embolism (PE) is a complication that results from a block in the main artery supplying ......

Deep Vein Thrombosis and Flying
WHO sponsored Research Into Global Hazards of Travel (WRIGHT) Project has discovered that the DVT .....