Intentional Breeding, Genetic Isolation Not as Significant as Traditionally Thought 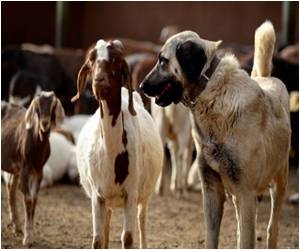 New research on the domestication of donkeys, camelids (dromedaries, Bactrian camels, llamas, alpacas) pigs, cattle, sheep and goats suggests that neither intentional breeding nor genetic isolation were as significant as traditionally thought.


Why is it important to get domestication right? "Our livestock is losing genetic diversity even faster than some wild animals, because of management practices like artificial insemination," Marshall said.
Advertisement
"We took only a bit of the diversity from the wild for domestication, and what we're looking at now is lopping it off really fast so we'll be left with little diversity to survive all the climate and disease issues we're facing. It really is a crisis situation.

"If we don't understand what it is we might be about to lose, then we don't count the cost of loss accurately or know how to plan for the future," she said.

For most of history, artificial selection on large herbivores was probably weak, Marshall said.

"Herders could not afford to kill many animals, particularly large-bodied animals with long gestation periods. To keep herd size stable, herders probably culled or castrated males surplus to the growth needs of the herd, allowing all females to breed," she said.

These management practices placed only light selection pressure on the herd's gene pool.

Paradoxically, environmental selection may, in many instances, have been stronger than artificial selection. Early herds were vulnerable to disease, droughts and storms, disasters that would have forced pastoralists to replenish herds from wild populations better adapted to harsh local conditions.

"Wild animals are generally faster, stronger and better adapted to the local conditions than domesticated ones. So, for example, Beja herders in Northeastern Africa intentionally bred their donkeys with African wild asses in order to produce stronger transport animals," she said.

"And sometimes interbreeding was accidental," she added.

In the Andes, Capriles said, wild and domestic camelids have interbred in such complex ways that alpacas are maternally related to both wild vicunas and guanacos, and the same is true for llamas.

The findings are published in The Proceedings of the National Academy of Sciences.

Birth Hormone may Control the Expression of Autism in Animals
In recent years, the scientific community has agreed that autism has its origins in early ......

Biomarker for Stress Hormones in Animals Affected by Global Climate Change
At the University of Massachusetts Amherst, chemical analyses by neuroscientist Jerrold Meyer and .....

Can Animals Really Help People in Hospitals?
Many people have an opinion on whether animals can help to improve well-being and care for patients ...

Everyone Votes in India, Whether They Travel by in Vehicles or Animals
Organizers of India's elections are making sure no one misses on a chance to vote, whether they ......