Insufficient Sunlight  A Trigger for Myopia 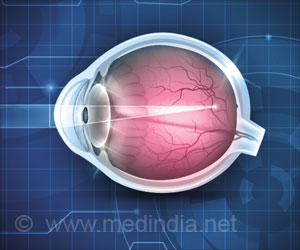 A total of 161 genetic factors associated with myopia have been identified by experts at the Mainz University Medical Center. The findings of the study show that insufficient sunlight is an important trigger in the development of myopia.

Myopia, also known as short-sightedness or near-sightedness, is the most common disorder affecting the eyesight and it is on the increase. This is particularly worrying for severely short-sighted people as it increases their risk of developing eyesight complications. The causes are both genetic and environmental.

Myopia is the inability of a person to see the distant objects clearly. Myopia is also known as near or short sightedness.
Advertisement
‘An identification of 161 genes associated with myopia shows the importance of sunlight for eye health.’

The international research group CREAM, which includes scientists from the Gutenberg Health Study of the Mainz University Medical Center, has now made important progress towards understanding the mechanisms behind the development of the condition. They evaluated the data of more than 250,000 people from Europe, Asia, and North America in cooperation with gene test provider 23andme.


The study established 161 genetic factors for spherical equivalent and myopia, most of which were previously unknown. It became clear that all retinal cell types play a role in the development of myopia alongside their primary role as light processors. This supports the theory that the internal layer of the eye communicates with the external layer to increase the length of the eye, which is a decisive factor in the development of myopia.

Clear the Blur-Tips to Boost Your Eye-Q

Eye problems may present as blurry vision or simply a minor headache, but they can affect your life in more ways than one. Here's a comprehensive yet compact guide to boost your eye-Q.
Advertisement
"We have known for some time that education-related behavior is a major environmental factor in developing short-sightedness", said co-author Professor Norbert Pfeiffer, Head of the Department of Ophthalmology at the Mainz University Medical Center. It was unclear which role close-up work during reading plays in the process, or if lack of sunlight is responsible. The new results provide important insights into the underlying biological mechanisms. They also support the most important advice Pfeiffer can give to concerned parents as a preventive measure against myopia: "Send your kids to play outside for two hours every day. And it's not just their eyes that will benefit."

The spread of short-sightedness is a worldwide phenomenon, particularly in South East Asia, where the incidence of myopia in school children has increased notably over the last decades. This is likely due to rising levels of education. People who read a great deal also perform a lot of close-up work, usually in poor levels of daylight. The eye adjusts to these visual habits and the eyeball becomes more elongated than normal as a result. But if it becomes too elongated, the cornea and lens focus the image just in front of the retina instead of on it, making distant objects appear blurry.

Nystagmus is a condition where the eyes make rapid, repetitive and uncontrolled movements. Usually both eyes are affected.
Advertisement
<< Twin with Your Dad on This Father's Day
Being Religious can Help You Sleep Better at Night >>

Techniques using laser allow faster recovery rates when compared to the older modalities. LASIK is the most popular and widely accepted vision surgery in our country.