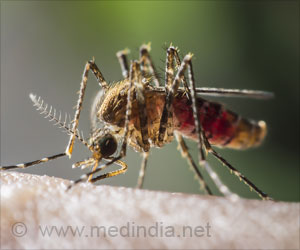 A molecule found on human cells and some animal cells could be a useful target for drugs against chikungunya virus infection and related diseases, suggests a new study published in the journal Nature. The study team was led by scientists at Washington University School of Medicine in St. Louis and funded in part by the National Institute of Allergy and Infectious Diseases (NIAID), part of the National Institutes of Health.

Chikungunya , an alphavirus, is transmitted to humans by the bite of an infected mosquito. Currently no specific treatment is available for chikungunya virus infection, which can cause fever and debilitating joint pain and arthritis. Small, sporadic outbreaks of chikungunya occurred in Africa, Asia, Europe, and the Indian and Pacific Oceans after the virus was identified in the 1950s. In 2013, the virus spread to the Americas and has since caused a widespread and ongoing epidemic.

Advertisement
‘The molecule called Mxra8 was identified as the key to the entry of chikungunya virus and related viruses into host cells.’

In this study, scientists aimed to better understand which traits make humans susceptible to chikungunya virus infection. Using the gene-editing tool CRISPR-Cas9, they performed a genome-wide screen that identified the molecule Mxra8 as a key to the entry of chikungunya virus and related viruses into host cells. In the laboratory, scientists were able to reduce the ability of chikungunya virus to infect cells by editing the human and mouse genes that encode Mxra8. The researchers also administered anti-Mxra8 antibodies to mice and infected the mice with chikungunya virus or O'nyong-nyong virus, another alphavirus. The antibody-treated mice had significantly lower levels of virus infection and related foot swelling as compared with a control group.


These findings, along with future studies to better understand how chikungunya virus interacts with Mxra8, could help inform development of drugs to treat diseases caused by alphaviruses, according to the authors.

Source: Eurekalert
Advertisement
<< Planning a Trip to Mars? You may Want to Remember Your Anti-...
New Treatment Regimen Offers a Better Approach to Fight Thyr... >>

New Insights on Chikungunya Virus and Chronic Joint Pain
One fourth of the patients infected with chikungunya have chronic joint pain. However, the virus ......

Breakthrough Discovery in the Treatment of Ross River Virus and Chikungunya Virus
A breakthrough in the treatment of mosquito transmitted viral diseases has been discovered by ......

Chikungunya Virus Can Cause Fatal Brain Infection
The painful, mosquito-borne virus, chikungunya, that's spreading fast across the Americas, can be .....