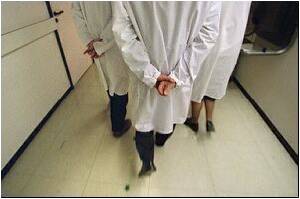 Coroners likelier to conduct inquests for deaths concerning younger people or people whose cause of death is fatal complications from medical care, states a study published in CMAJ (Canadian Medical Association Journal).

Australian researchers compared characteristics of deaths investigated through inquests with characteristics of the much larger number of investigations that take place behind closed doors. They looked at data on 20 379 deaths in five Australian states over seven and a half years; 1252 (6.1%) proceeded to inquest, and about half of those inquests were held at the discretion of the coroner.

Over the counter baby products cannot prevent Sudden Infant Death Syndrome says FDA. When a child under age one dies suddenly without an explainable cause of death.
Advertisement

The researchers found that inquests were much more likely for childhood deaths and much less likely for deaths among the elderly. Deaths arising from complications of medical care often prompted inquests, whereas suicides rarely did.


"There are several reasons why coroners have preferences for inquests in certain cases and not others," said lead author, Mr. Simon Walter from the Melbourne School of Population Health. "Some deaths, like those of children, are shocking to the community and there is often an expectation that a public inquiry be held. On the other hand, for other kinds of deaths, such as suicides, coroners may feel that they have little to say about how to prevent similar events in the future."

A Study was conducted that hoped to define the clinical profile, epidemiology, and frequency of trauma-related sudden deaths in young athletes of the USA.
Advertisement
"Inquests, and the publicity surrounding them, shape public knowledge and understanding of death," said Dr. David Studdert, coauthor of the study, and leader of the research group at the University of Melbourne. "What this study shows is that the entire picture could be somewhat distorted because of choices made behind the scenes about which types of deaths to highlight."

"As governments around the world look to coroners to function as proactive agents of public health, not merely as passive investigators of death, there is a growing need to demystify coroners' functions," conclude the authors.
Source: Eurekalert

Rapid treatment with tranexamic acid can save patients with severe bleeding whether from accidents or violence.
Advertisement
Advertisement
This site uses cookies to deliver our services.By using our site, you acknowledge that you have read and understand our Cookie Policy, Privacy Policy, and our Terms of Use  Ok, Got it. Close
×