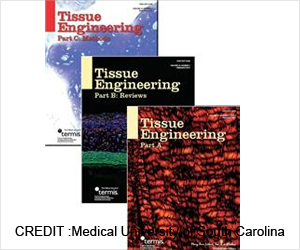 A minimally invasive method which can demonstrate the effectiveness of a regenerative cardiac patch was demonstrated by a research team from the University of North Carolina.

The regenerative cardiac patch is capable of promoting the repair of damaged cardiac tissue in a mouse model of a heart attack. The biomaterials which are sprayed onto the heart are usually formed of a platelet fibrin gel, called a cardiac patch which helps the heart to heal without the need for sutures or glue, was published as an article in Tissue Engineering, Part C, a peer-reviewed journal from Mary Ann Liebert, Inc., publishers.

A new shear-thinning biomaterial made of gelatin and nanoparticles was found to prevent uncontrolled bleeding in patients.
Advertisement
‘Newly designed cardiac patch by spraying biomaterials may promote cardiac repair after myocardial infarction.’


In the article entitled "A Regenerative Cardiac Patch Formed by Spray Painting of Biomaterials Onto the Heart," the researchers showed that the sprayed-on materials were non-toxic to the heart muscle, would adhere to the heart and degrade over time, and could release a variety of growth factors to promote cardiac repair.

University of Virginia scientists have developed new light-emitting biomaterial that could improve tumor imaging.
Advertisement
"The spray painting method, as described in this manuscript, is an excellent example of how tissue engineering has evolved since the 1990s," says Methods Co-Editor-in-Chief John A. Jansen, DDS, PhD, Professor and Head, Department of Biomaterials, Radboud University Medical Center, The Netherlands. "The described delivery method is easy to apply in clinics and shows significant potential for patient treatment."

The new I-Wire heart-on-a-chip device helps to reproduce the response of cardiac cells in a living heart.
Advertisement
<< Mixing Alcohol and Energy Drinks May Increase the Risk Of In...
Impact of Nasogastric Tube Placement in Patients With Upper ... >>

A cardiac murmur is an extra whooshing sound during the heartbeat due to the turbulence of blood flow in the heart or blood vessels.